Way back in 1988, 1st May, I was an inexperienced birder birding Hanningfield Reservoir whilst on my annual trip to the Rugby League Cup Final and was delighted to find a number of Yellow Wagtails on the outer banking. In amongst them were 50+ Yellow Wagtails, Grey, White and Pied Wagtails and an individual that I put down as a Blue-headed Wagtail simply because it was a Wagtail with a bluish head. I took some photographs which given the distance and my limited camera at the time are very small and blurred (they were on old fashioned film at the time, subsequently scanned with no adjustment to colour or lighting).
As the years rolled on I became increasingly intrigued by what I had passed off as Blue-headed Wagtail, not least because I have seen many since then and they looked nothing like the Hanningfield bird and I have recently re-visited the phots with a view to solving the mystery.
Whilst I cannot expect certainty on the attached blurred photographs 34 years on I would welcome any thoughts and maybe someone else saw the same bird?
The wagtail in question is certainly of the Yellow Wagtail Motacilla flava group, has a very pale ice blue head with no supercilium, indeed no apparent head markings, an isolated beady black eye, and black bill. The body appears to be typical Male Yellow Wagtail
All the flava with blue heads are easily eliminated due to being too dark and having clean white supercilia. The only bird I can find to fit all the criteria, however unlikely, is North Mongolian Yellow Wagtail, Motacilla flava leucocephala but I am sure there is a more likely explanation
Interestingly a year later, 30.4.89 on the same excursion I found a similar group at Hanningfield which again included a Blue-headed Wagtail but this time I specifically noted a blue-grey head and white supercilium so probably a proper Blue-headed Wagtail!
Any help very much appreciated thank you

To the best of my knowledge, these are often reported as Blue Headed Wagtail, and we get a few in Norfolk every year. They are migrants from Europe, usually France I believe, but are basically a sub species of Yellow Wagtail.

Thanks for your reply Kevriano. I am curious as to which sub species it is. I think Blue Wagtail is excluded on colour and the lack of a supercilium. 'Channel Wagtail' , can have a paler head but still has a clean white supercilium and not sure it would be as pale blue as this one.

33 years after the sighting, is this what’s known as a Cold Case? I’ve certainly never seen anything like this individual in Europe, the Caucasus or the Middle East and I can see why you’re wondering about leucocephala, hopefully some other folk on here with experience of that ssp can advise.

Supporter
The pictures appear good enough to exclude a yellow throat, which also excludes leucocephala.
A very pale "Channel Wagtail" seems possible, but the presence of white on the flanks could also mean that this is a leucistic bird.

I would not exclude a yellow throat and leucocephala as well (look at enlarged picture). The bird certainly looks better on leucocephala with its (whitish looking head) than any other yellow wagtail subspecies. The problem is that the quality of the photos is not the best and the bird would be extremely rare - so probably no one would dare to give a verdict

ps . we had in Poland one this year (probably ... waiting for verdict)

Thank you for the comments. I have no illusions about a positive id on such poor pictures but wanted to air them as they have nagged at me for years. The optimist in me says that leucocephala remains a possibility and several pictures do suggest that the head colour can extend beneath the bill above the yellow throat similar to this bird but the realist accepts that that hybrid or leucistic can't be ruled out and I fear that this remains one that will be left unproven due to my inexperience at the time, very limited supporting notes and poor quality pictures.

Michał Jaro said:
ps . we had in Poland one this year (probably ... waiting for verdict)
Click to expand...

Were there any photographs Michal?

Log in to Facebook to start sharing and connecting with your friends, family and people you know.

Thanks Michal. There are plenty of similarities!

IIRC leucocephela was on the British List for some while, until clarification about ‘Channel’ Wagtails became clearer and it was realised that pale ‘Channels’ were most likely being taken as leucocephelas.

There are no accepted leucocephela records for Britain now. Your bird looks like a pale end ‘Channel’ to me.

Could you link the examples ? Is it about such a bird? Or even more whitish?
https://flic.kr/p/2gsAo5R 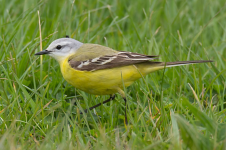 Pipits and Wagtails of Europe, Asia and North America. One type of flavissima and flava hybrids is described there:
"Individuals which are closely similar to leucocephala (occasionally even wholly white-headed). (...) We have not studied any of these hybrids and suggest that further research is needed to confirm that the beema- and leucocephala-like birds are in fact the result of interbreeding between flavissima and flava." Interesting.
I can't find any vocalisation of leucocephala in the net at all. No mention anywhere, no on xeno- canto. Although ssp. leucocephala is widely confirmed. Strange for me... (Sorry for extending the topic and thank you for making me search - especially BH!

Thank you for the excellent responses and BBRC summaries and apologies for the delayed response: away camping with minimal signal for a week (bliss!) at RIAT. It is indeed interesting that 'beema and leucocephala-like birds' are assumed to be hybrids which requires confirmation rather than an assumption that they are vagrants that require confirmation. I was probably a lot happier way back in 1988 when I only knew about British Yellow-headed continental Blue-headed races!