Spoonbill Finder said:
I'm typing this to the accompaniment of Haircut 100's 'feel good' tune from the '80s. Today at Upton Warren was indeed a Fantastic Day. the best day of 2018 so far!

It started off with the Whooper Swan, which flew south through the Flashes with a Mute Swan. I thought this may be the last we were going to see of this long-staying resident. However, true to form, it resurfaced at the Moors Pool just over an hour later. News then emerged from the Moors Pool of the years first Oystercatcher. I didn't rush over, reasoning that it would probably hang around or, if not, I would surely see one soon anyway!

My first UW year tick came after the early morning drizzle had been replaced by blue sky and sunshine, when the unmistakable shape of a Peregrine appeared on the northernmost large transmitter masts. A quick scan with the scope confirmed the
Identity. As I walked on further down the track day ticks transpired in the shape of Dunnock, Stock Dove, Bullfinch, Great Tit, Goldcrest and the obliging Cetti's Warbler giving its contact call and showing well just above the Hen Brook near the bridge. Retracing my steps I heard the song of a Treecreeper, which I saw in a tree near the Hen Brook Hide before it flew to the tree to the immediate southern side of the bridge. Back at the hide an Oystercatcher, probably the one that had been at the Moors Pool earlier appeared on one of the islands.

Earlier in the morning I had counted c750 Lapwing at the Flashes; 9 Curlew were there first thing before flying out and Phil Wood found the only Snipe of the morning (there were 5 present later in the day). Teal numbered 31, Coot 30; 160 Canada Geese & 23 Greylags grazed in the field behind the first flash and c30 Redwing were in the fields to the south and west of the hide. In addition the Sailing Pool held 9 Great-crested Grebe, a Little Grebe, 12 Tufted Duck and a handful of Cormorant.

After a spot of lunch overlooking the Sailing Pool, with only an overflying LBBG added to my day list, I headed towards the East Hide at the Moors Pool. On the way there I added a Shelduck on the North Moors Pool and Song Thrush to the day list. Shoveler, Pochard & Gadwall were all logged from the East Hide. A squealing Water Rail & Chaffinch were added from the North Moors Hide, and Greenfinch, Reed Bunting & Great Spotted Woodpecker were seen on the feeding stations in front of the hides down the west track. Strangely, finch numbers were few, with no Lesser Redpoll, Siskin and just 2 Goldfinch seen. The only Linnet of the day was at the Flashes mid-morning. A short stroll along the Salwarpe brought me my 4th UW year tick when 2 Rook flew south over the field between the river and the A38. Back at the Jacobs Hide a Little Egret was sighted as it flew in from the south and landed near the Sand Martin box.

I ended the day at the Flashes, where a few of us congregated in the main hide hoping to see the Barn Owl. The next addition to the day list was a Green Woodpecker, which was picked up by Regor as it flew into the oak tree opposite. Then came the 'champagne moment' of the day when a bird in amongst the BHGs in front of the sewage works was spotted and tentatively identified as a Common Gull. On closer examination the bird showed features more associated with an adult winter Kittiwake: a plain yellow bill with no trace of a black band, and 2 dark vertical lines behind the dark eyes. The legs appeared small and when the bird rose from a seated position were of a dark hue. Finally, when the bird flew after being spooked, it revealed the 'dipped in ink' primaries which are a key diagnostic feature of this species. It did eventually come back to earth on the newly created mound in front of the first flash reed bed.

Meanwhile at around 4.50pm the Barn Owl appeared from the southern end of the flash and flew north before disappearing somewhere near the Cuckoo Hide. It's not often that this magnificent and graceful creature plays the supporting role but I'm afraid on this occasion in my mind it certainly did. This was only the 3rd Kittiwake I've seen at Upton Warren in 14 years of visiting the reserve, and the first I'd seen since April 2013. I also can't recall seeing an adult in winter plumage anywhere before!

The final treat of the day came well past 5pm when a Green Sandpiper flew in calling. This took my day list up to 59 species, with 5 UW year ticks. I searched frantically in the gathering gloom for a Herring Gull or maybe even a Yellow-legged Gull to take my tally up to 60 birds for the day but, alas, there were just 4 large gulls in the roost and they were all LBBGs!

Anyway who cares. It was a fantastic day. I wonder if Nick Hayward was a birder?:t:B
Click to expand...

Like others have previously stated, sounds like a good day Andy, perhaps the most surprising part is your admission to listening to Nik Hayward😳

Had The Moors to myself this afternoon so I thought I'd report the few notable sightings (and lack of sightings).

Shelduck had increased to 5, two pairs on the main pool and a lone male on the North Moors. No sign of the Wigeon or Oystercatcher seen earlier in the day. Whooper Swan still present and correct, also one Little Egret. No geese of any description, no curlew and only one gull other than blackheads (lesser black back). Only found one Snipe. Around two hundred lapwing flew over towards The Flashes as I was leaving.

Lots of activity from the resident birds, including Mallards and Blackheads courting and Blue Tits checking out nest boxes.

Barn Owl at the Flashes yesterday morning at 7:40am but no sign of the Kittiwake as per Steve Whitehouse

From the Flashes this morning Dave J reports:

From the Moors Pool this morning Dave J reports:

Tomorrow we will again be at the FLASHES.
Plenty of work to be done. But most URGENT is to FLUSH out the FOX from inside the FOX fencing.
We have found the hole in the fence and was seen coming into the FOX free zone recently. We plan to form a long tight line and walk it out back through the hole.
After this we will continue to remove the sprawling ramble from the West hedgerow and a section of the public footpath. The Hawthorne that have been overgrown with bramble are not in a good state and some might have already died off. We plan to plant up areas with Hawthorne saplings asap.
We will also be cutting back the willows in the Hen brio triangle. The reason is to maintain the open vista required by wading birds . It is also important to create low scrub and marsh type habitat for a range of marsh birds including water rail , cetti's warblers and reed bunting.
The FOX fencing will also be prepared.
Please meet at Sailing pool from 8.45am.
:t: john
ps Paul will be bringing the strimmer to cut the ramble .A bit easier than using the loppers.

Barn Owl again this evening at the Flashes at 5:06pm as per Mick Barlow

Whooper Swan on the North Moors as per JTB
B

Somewhat ungainly Moorhen on the feeder at the new hide, hanging on by its toe-nails!

No Barn Owl first thing today but a very nice sunrise plus lots of nice cakes at the workparty!:t::t:

But tonight observers were spoilt

Photo of the month John.

The first task was to FLUSH the FOX that has been foraging inside the FOX fencing over the last 2 weeks.
But nothing came out , hopefully the frost forced it to lie up elsewhere.
After this we repaired the holes that we had previously found.
We completed the first phase of cutting back the bramble patches that have smoothered most of our hawthorn hedgerows. Many of these hedgerows have now sadly seen their best days. But to try and rejuvenate them and extend their lives we have trimmed and pruned some of the older bushes between the cuckoo and avocet hides.
The bramble covering most of the West hedgerow to the south of the avocet hide was removed from the central section two large clumps of bramble at either end were left uncut. Some of the Hawthorn was laid to thicken up and give it some longevity.
Another section of hedgerow at the West end of the public footpath had the bramble removed from around it which will give itba new lease of life.
Julie cleared the hides out. Again plenty of rubbish left in the hides... please take yours home.
The drainage ditch in front if avocet hide was cleared.
The Hen Brook triangle to the North of the 1st Flash is an area you cannot see from the hides and it has been a forgotten zone for three years. However the willows within it are starting to grow back and would enclose the the first flash and ultimately the open vista so important to our breeding waders would be compromised. So today we started cutting them back. This will be completed next week . Also the habitat here was formerly a very good area for snipe, teal and stonechat. Short eared owl and barn owl both regularly hunted here. So next week we will be strimming the overgrown rank vegetation and in conjunction with the willow removal the area should become a viable wet marshy site once again.

Thanks for the Cakes from Julie, Sue and Ian although I did miss out on the rock cake:-C:eat: john8-P

1 and 2 the west hedgerow from the hide and the public footpath
3. the footpath hedgerow (west end) after bramble removed
4. the 'old hedge' ( between cuckoo and avocet hide)after pruning
5. The Hen Brook Triangle today willows were cut back - next week we will be strimming the rank overgrown vegetation and opening up the small pools

Amazing you must have been up early8-P
It performed well tonight:t:

And the burger (without fries)

Early morning and across the reserve Des and Andy P report:

An unusual visitor to the North Moors feeding station this afternoon, obviously not content with the food on the ground. 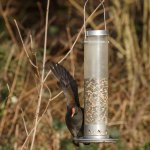 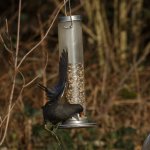