Kingfisher showing well in front of east hide at the moors this morning. No major changes although juv Water Rail and singing Willow Warbler at moors, 2 Lesser Whitethroat at the Flashes were additions over yesterday

I am critical.....of everything.....but i do try and make it constructive otherwise there is little point imo.

I have actually been banned from Twitter - no surprises there as collective eyebrows narrow!

It’s gr8 for news and alerts as is WhatsApp but i hope the pre-Covid style of reporting and picture posting returns as i not only enjoy reading the stuff but consider UW as a site that takes the pulse of what is passing through to give a heads up although that has somewhat diminished with lack of coverage but that will now change just in time for return passage.

Took a day off work, forgotten how relaxing it can be at Upton. Went to the moors first only did east side and north moors. looks like there is a fox family walking around the causeway saw a adult and juv. Moved onto the flashes , NEW Cuckoo hide is nice don't think anyone will be able to moan about it. caught up with a couple of gents in the Avocet hide and ticked LRP the last bird I ticked the last time I was there.
Didn't count bird numbers, just enjoyed the place ,did tick 51 for the morning.
here's some pics

Congratulations to Terry Wells, Bob Potter and John Coombes on their well deserved receipt of the Trust's Wild Service Award for services to the work parties over a considerable number of years.

Anyone correctly guessing their combined age gets a prize 😉

Phil Andrews said:
Congratulations to Terry Wells, Bob Potter and John Coombes on their well deserved receipt of the Trust's Wild Service Award for services to the work parties over a considerable number of years.

Anyone correctly guessing their combined age gets a prize 😉
Click to expand...

Phil Andrews said:
Congratulations to Terry Wells, Bob Potter and John Coombes on their well deserved receipt of the Trust's Wild Service Award for services to the work parties over a considerable number of years.

Anyone correctly guessing their combined age gets a prize 😉
Click to expand...

Thanks to the unknown person who found my lens hood and put it on the gate post by the East Hide at the Moors. Thanks to Andy P who recognised it and was around to say yes when I was asking people if they had seen it.
So I am safely reunited with it . Think I'll glue it on- clicks in place but there is no safety lock. A design fault!
Phil E
B

Good to see folks happy to be back at Upton Warren. Pictures taken today at The Flashes. LRP still sitting; difficult to see if its back is towards the hide. 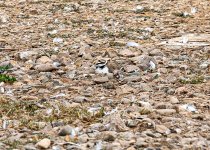 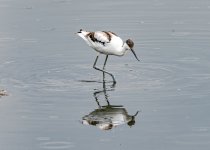 Pics from East Hide late morning.
Thanks to Andy P for pointing out the Hobby.
Common Sandpiper eating something on the edge of the island rather than probing in the mud.
Nice brood of Tufted Duck

Dunlin at the Flashes this morning plus good view of Garden Warbler along path at back of Cuckoo hide. Also Spotted Flycatcher by transmitter compound. No sign of juv Redstart from yesterday (picture from Tuesday) Otherwise 8 Green Sandpiper, 3 Common Sandpiper, Little Egret, 4 LRP and circa 25 Avocet. Also 2 fledgling Cetti’s Warbler calling and showing to right of Cuckoo hide. Peregrine to mast & 2 Sand Martin through.

The first thing that struck me from the Moors car park was the deafening.....silence! Nary a sound was heard which was ominous to say the least. Walking the causeway i passed 2 separate individuals sporting only cameras plus another upon the return with bins - i thought here we go, quite what they found to photograph will require a hefty dollop of optimism with added Photoshop methinks.....

From the hide there appeared to be the makings of a fine hay crop as all the islands were vegetated almost edge to edge with 3-5’ of wild flowers of which i am a fan as botany was my first love but the ‘Upton Assemblage’ did look out of place. I don’t know the general management for the islands prior to birds returning to breed but presumably there is some pre-nuptial strimming (ooh Matron)? Understandably the Trust’s Draconian Covid compliance has meant minimum presence and management.

I remember overhearing a ‘birder’ in the same hide a coupla years ago complaining about the noise from the Gullery and ‘can’t the Trust do something about it’ - on a bird reserve? Nice try mate Well they have but be careful what you wish for. I used to visit the huge colony at Worfield Bog, Bridgnorth.....just to hear that noise, a fabulous bustling den of iniquity - all sorts of dubious activity to keep you interested. A bit like Kidderminster on a sunny Saturday - Worfield went the way of the Dodo because influential residents with a bit of money ‘didn’t like the noise’ and corrupt councillors did their bidding and now there is nothing.

I digress. We didn’t think the walk opposite worth the effort - no point in viewing the same thing from the opposite angle so we decanted to the Flashes. An adult Common Tern clocked on the Sailing Pool was doing its best to find a spot to plunge-dive for fish. That area imho is an absolute mess and an eyesore to boot but leave them to it i say.

Onward to Wader Central. The Hen Brook Hide was ‘closed for repairs’ - it looked like nature had finally claimed it as one of its own - i half expected to bump into Livingstone asking me if i had seen anything of Stanley. The new hide is a beast and smells, well, new c/w a microclimate inside that befits its Nordic interior looks. All windows now open we scanned and scanned. A 2nd Little Egret and a coupla flighty Green Sands plus a scruffy little thing lurking around the boat. I now realise that it was a juvenile Cetti’s as per the above post - must try harder. The main hide contained one birder c/w bins and scope - finally we had hit paydirt in the form of somebody else actually there to bird. The 3 of us bantered about Covid, the Trust and possible inheritance from a recently deceased Uncle which might (or might not) benefit myself or my adjacent brother - quite what the original occupant thought of this is unknown but that is our MO. 7 spp of wader were noted including 2 Blackwits, 3 Curlew and double figures Green Sands. Stock Doves were here and there and another, or the same, Common Tern was calling from a sitting position on one of the smaller islands which were relatively ‘clean’ compared to the triple-canopy habitat at the other end of the reserve.

On the one hand i was surprised to see people in single figures but not ppl without bins but each to their own. I have heard of a groundswell of disgruntled now former members which comes as no surprise but hopefully will still visit under the reciprocal arrangement.....until that too breaks down following the Norfolk model.

After a quiet couple of weeks the reserve was busier with people today. Too busy since one group dominated the hides en masse. Not once but three times I found no room at the inn. Back in the day this would have been considered rude but given the present paranoia it's a kick in the teeth - the more so in light of the words on WWT's coronavirus page. Anyway persistence coupled with some hanging around allowed me to clock the usual early August suspects. The best of these was a (the?) hobby that seems to have taken up residence at the Moors.
B

Some pictures from The Moors today. First two taken from the east hide, second two from the west. 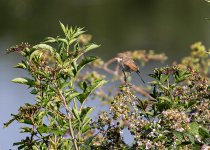 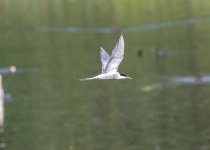 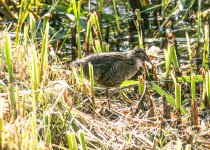 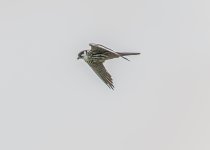 I had a great afternoon - my first in many months

Could someone more knowledgeable than me tell me if this is black tailed or bar tailed? I have never seen a bar tailed before and my book says it fits for the orange-brown breast continuing underneath, but the beak looks more black tailed? ( and all the notes in the book are of black tailed!) Sorry it was a long way away!

Also I know the Trust put in some nest boxes for shelducks and I saw a juvenile - does this mean successful breading? Lots of green sands too! Well at least 6

15 years in the Pyrenees