Hi,
I have never been to the North East of England so I hope to visit in early June. What I mean by the North East is Newcastle and further North. I would hope to see Roseate Tern on this visit amongst other species. I am a National Trust, RSPB, WWT member so will make the most of them sites. Birds, historical sites, scenery, mammals, butterflies and dragonflies would be the main aim if the visit. Which of the Tern colonies are we allowed to visit? I am not sure if I will have the chance to visit Northumberland National Park but will try.

To be sure of roseate tern, you need to visit Coquet Island, which means getting a boat operated by Puffin Cruises from Amble harbour. You can't land on the island, but you will see the terns sitting on their numbered nest boxes, and should spot some fly-pasts (amongst larger numbers of other tern species). You'll also see plenty of auks, including puffins. If you like coffee, get a takeaway from Mocha Mondo, in one of the 'pods' near Amble harbour.
The Long Nanny in Beadnell Bay has a large mainland colony of Arctic terns, and much smaller numbers of little terns. It is wardened - you can visit the warden's hut and see Arctic terns breeding close by, with more distant views of little terns out on the beach.
The Farne Islands provide a close-up experience of terns, sometimes too close as you will be attacked by Arctic terns - wear a hat! You'll see the common and Sandwich terns too, but you are very unlikely to see roseate tern here. Take a boat from Bamburgh, Billy Shiels is the best-known operator; the trips which include a landing on Staple Island tend to be more oriented towards birders although you will primarily be visiting the islands with casual tourists. Billy Shiels also runs less frequent pelagic trips on a RIB to look for white-beaked dolphins - highly recommended, although it is cetacean focussed - they will point out seabirds like skuas, but won't stop for them.
As far as butterflies are concerned, I think you will be too early for the dark-green fritillaries which are found on some of the coastal dunes - Holy Island (Lindisfarne) is probably the easiest place to see them. Others will be able to give you more information on other species you might be interested in like large heath.

A brilliant choice of venue H.

Have a look at these Opus articles while you're waiting for some specific info. There's lots of choices of sites for you.
H

I have built up a picture and I am guessing I won't be stopping off at Newcastle as it seems a bit of a distance.

In terms of nature reserves I would hope to visit:-

Historical sites I hope to visit are:-


I will be staying a maximum of 3 nights so there will be lots of changes here. I am not sure if I will go from June8-1oth or in early July now.
H

Hoping to visit from the 5th to the 7th July will that be too late ?

Himalaya said:
Hoping to visit from the 5th to the 7th July will that be too late ?

I read an article saying the Arctic Terns have deserted the Farne Islands this year - is it still worth going there
Click to expand...

If you're not convinced with Northumberland for whatever reason, and flexible, I would recommend Tunstall Reservoir at Wolsingham in County Durham and the North Pennines through that way in general. 'Magical place. I've been fortunate enough to get around a few places: Japan, Israel, Lebanon, United States, Bosnia and so on, but I haven't seen anywhere that can top Weardale for beauty. Birds wise, there are: wheatear, merlin, cuckoo, redstarts, owls, flycatchers, harriers, dippers, wagtails and so on; 'so plenty to go at. On a nice day, it's a beauty of a setting that you'd have to go a long way to better. 'Just magical countryside with little streams meandering through and of course a big reservoir which you can walk around with ease and is just stunning in that particular landscape.
H

Hi Paul - that sounds fantastic but my heart is set on Northumberland.


So many different types of trips - how would they differ from the Coquet island trip?

I would love to see Seals, Dolphins and other wildlife too!

i went on a billy shiel's boat trip last month great value well worth it, just mine was in a sea fog though still enjoyed it
H

Prestdj said:
i went on a billy shiel's boat trip last month great value well worth it, just mine was in a sea fog though still enjoyed it
Click to expand...

What did you see?

the harbour had plenty of eiders, the boat trip itself i saw lots of puffins,razorbill,guillemot,shag,arctic tern, gannet plus a few seals the visibility was about 50m at times but the birds were close and plentiful
H

Thanks for the advice. I have booked my stay there and going on a trip with Billy Shiels on Tuesday.
H

I have not booked with Puffin Cruises yet as I will need to wait until Sunday when next weeks schedule is ready.

Tuesday got the tour booked for Holy Island and Inner Farne which is a 4.5 hour trip from about 11.30

Wednesday booked on Coquet Island trip about 12 and probably going to Dustanburgh Castle after it which is unbooked yet.

I'll probably go to Druridge country park, Creswell and Annstead Dunes in between them.

Anything else I could fit in ?
H

I haven't booked the Farne Islands - should I?
H

Prestdj said:
some pics here from northumberland i took, quite a few of the farne boat trip halifax to northumberland
Click to expand...

Nice pics. Weather is not looking good for me 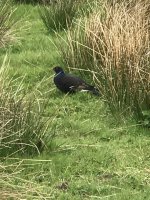 Upper Teesdale is worth visiting. Although further to travel than you wished. This photo of a Black Grouse was just taken with my iPhone in Upper Teesdale in May 2017.

Sunday at 1:04 AM
etudiant
E
G
Reintroducing the lynx
2 3