Hi everyone,
Here are a few different duck/waterfowl species I photographed in mid-August in the Vogelplas Starrevaart (Netherlands) where I'd like to ask for or confirm my IDs on. The area is known for its high diversity of bird species. I believe it's likely that I was maybe in the "eclipse" period for the ducks, as I saw very few distinctive male plumages, and this is true for most duck species I saw. I'll apologize in advance, many of the photos are of abysmal quality, but that's because the birds were ~150 meters away and so I had to crop the photos a lot.
Thanks in advance for your help!
Best, Max

Number 1: I believe this is a scaup? There were quite a few, but most appeared to be males. What's weird is that it seems to have a couple messy feathers on the back of its head which almost make it look like a tiny tuft (of a tufted duck). Also, the plumage seems off, as the underside is dark grey (and this seemed to be the case with all the males in the area), whereas the images of male scaup and tufted duck I see online have a very white belly. 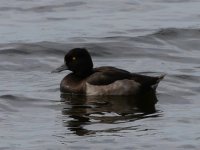 Unfortunately, there weren't many females, and this seems to have been the only one where the face is kinda visible. The quality isn't great, but it does seem as though there is some white at the front of the head, and I believe this is a distinctive feature of a scaup? 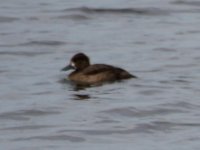 Number 2: I believe this is a ruddy duck 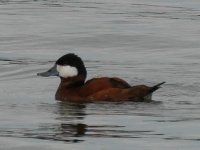 Number 3: these are shovelers right? Eclispe male on the left, female on the right? Or are both females? What I find weird is that I didn't see any ducks with the normal male shoveler plumage, but lots of females. 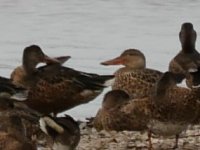 Number 4: there's a distinctive green feather in this duck's wings. Possibly an eclipse male shoveler? I couldn't get a shot of its beak unfortunately. 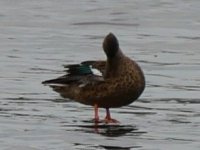 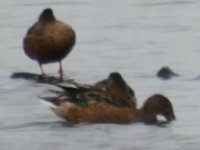 Number 5: an eclipse male mallard? That beak is definitely yellow, but the head is clearly not 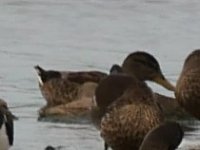 Number 6: maybe a godwit species? Or a snipe? 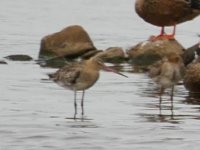 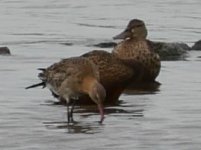 1. Both tufted ducks (white at the bill-base is fairly common, and on scaup it's more extensive).
2. Yes, ruddy duck.
3. Standing bird left of centre could be eclipse male mallard - not sure. To its right is a female-type shoveler. Many ducks are in eclipse at that time of year, so you don't see many smart males.
4. Yes, male ruddy duck.
5. Yes, eclipse male mallard (and looking rather like the bird in 3).
6. Godwits - look like black-tailed godwit.
A

Hello,
agree with Butty about his IDs, but I think there is a slight misplacing/wrong numbering?) in his answer, that might cause some confusion:
Same ID, but other (I believe/hope) right numbering:
1 Tufted Duck
2 Tufted Duck. Every time I see a bird like this with a darker, orange tinged eye, a spatulate bill with a diagonal placed darker bill-tipp and some greyish wash to the back, I think of a Tufted Duck x Pochard hybrid. But all these features are within variation for a pure Tufted Duck, I assume. Experts, please help with this bird.
3 Ruddy Duck
4 two Shovelers in the center
5 (two pictures) both Shovelers (dark bellys, green speculum with broad, nearly triangular-shaped white padge)
6 eclipse male Mallard (yellow bill)
7 (two pictures) K1 Black-tailed GW and 2 Shovelers

Hoping this is helpful!

@Butty Thanks for your help! May I ask which features you used to identify these birds? Particularly for Numbers 1, 4, and 6?

@Alexander Stöhr Thank you too! I think Butty actually did it better in terms of the numbering system, as he followed the system I used. The first two photos I was fairly certain were of the same species (just male/female) which is why I put them both under #1.

Also, you two seem to disagree on number #4 (Butty says male ruddy duck, Alexander says shoveler). I'm much more inclined to go with Alexander's ID of shoveler here, this doesn't look much like a ruddy duck to me.
B