I've been an avid birder for much of my life, but this bird, which my brother and I came across on a beach on Edisto Island in South Carolina on 1/7/2021 has completely stumped me. Picture included below, but I will offer as much of a detailed description as I can:

Size: About duck size, probably a foot or more likely a foot and a quarter or half long, maybe half a foot or a quarter of a foot wide, head about as big as an adult hand
Beak: Roughly three to five inches long, less than an inch wide, looks similar to a heron beak or a short and straight sandpiper beak. Black upper mandible with a lighter (possibly white) lower mandible
Neck: chin on down to belly is very white
Breast :
Belly: white with little to no speckling
Wings: Dark brown with white tips, same is true under the wings
Tail: Didn't really get a good look at it but from the picture it looks rather short and stubby, perhaps a slightly lighter shade of dark brown but that could just be the light, also appears to have white tipped feathers
Legs: Black facing outward, white on the edges, and not sure whether black or white on the inward side. I am also not sure how long they are as it appeared he or she had possibly tucked part of the leg in
Feet: Didn't get a great look at them, but they are webbed, cannot remember whether there are four toes or three, or what kind of webbing exactly, but it looked pretty significant and if I remember correctly was a subtle shade of red

Additional Information: This bird was injured so we contacted first the DNR and then ultimately got in contact with The Avian Conservation Center & Center for Birds of Prey in Charleston, SC. The necessary steps were safely taken to get the bird to them, but as a consequence my brother and I really weren't paying super close attention to the small details of the bird but instead collecting it and making sure it wouldn't harm itself (we believe the injury was to the leg sticking out in the picture). Therefore, I also can't really speak on temperament because he or she was exhausted and likely in pain. The bird has been safely passed off to the Conservation Center so that he or she can get all fixed up and released back into the wild. 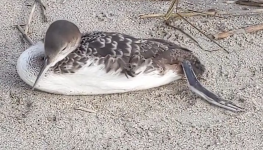 Well done for rescuing the Red-throated Loon, I hope it survives thanks to your efforts.

Common Loon Overview, All About Birds, Cornell Lab of Ornithology

The eerie calls of Common Loons echo across clear lakes of the northern wilderness. Summer adults are regally patterned in black and white. In winter, they are plain gray above and white below, and you’ll find them close to shore on most seacoasts and a good many inland reservoirs and lakes...
www.allaboutbirds.org
Last edited: Jan 9, 2021

Well, I'm sorry to disagree, but this is a Common Loon (aka Great Northern Diver).

I must admit, I didn’t really look properly at the image was more concerned with the rescue story and welcoming our new member, but yes, an imm Great Northern Diver.

RafaelMatias said:
Well, I'm sorry to disagree, but this is a Common Loon (aka Great Northern Diver).

Welcome to the Forum, tteasdale. Your fine photo is of a Common Loon. I hope that your bird gets back to full health.

We're glad you found us and thanks for taking a moment to say hello. Please join in wherever you like