Went to Lochwinnoch today. No sign of the long-staying great white egret or the green sandpiper.

The highlight was a ruddy shelduck. I was in the visitor centre tower and chatting to a staff member when it came flying in to the reserve. It set about bullying some Canada geese but soon settled down. This was a lifer for me. It's quite possible that it's an escape from a collection, but there was another spotted in Lanark as well. Probably a coincidence, but maybe it suggests there's a small influx of them.

This is the first bird I've "found" although you couldn't really have missed it. A little later I heard a man who entered the visitor centre say "there it is" as he spotted it through the window and I felt a wee bit chuffed that I made people set out to see it.

Other highlights included the first of the season's whooper swans. There are some resident whoopers in the Clyde area, but it's always good to see the migrants arrive. The water was really high and all the tufted ducks had shifted over to Barr Loch. The only other ducks visible on Aird Meadow were teal and mallard, although there were a good number of greylag geese.

Some snipe were spotted flying up from the marsh. I also spotted three raptors: common buzzard, kestrel and sparrowhawk.

The feeding stations were really busy with nuthatch being the highlight, but hopefully as we enter winter we'll see siskin, brambling and redpoll.

They've been doing a lot of work on the reserve, reshaping Aird Meadow. I think the aim is to create more muddy areas that'll attract waders. There's already a good number of lapwing, and we're seeing regular reports of other waders now, so hopefully it'll work. But it makes you realise that a lot of conservation is about attracting particular species to please us.

Some parts of Glasgow are now a hive of activity in preparations for COP26 and it appears this extends to the Botanic Gardens. Walked past a wooden hut with a nest box hanging from it, seemed rather odd until I saw this RSPB Scotland sign they are about to put up. I will update when the sea and puffins section appears

Yeah they published a short video about the Botanic Gardens on Twitter a couple of weeks ago. I think I might take a trip over on Sunday to see what's going on.

Do you ever walk along the Kelvin? There's often kingfishers and dippers there.

Yes I often walk along the Kelvin. Having Dippers there is weird though. We also have Goosanders and Grey Wagtails too.

There are goosanders on the Clyde at Cuningar Loop too. But it took me ages this year to see my first grey wagtail.

Lochwinnoch today to buy a small scope - Kowa 501. I'd like to get a full size, high quality scope but I'm saving to get a new bathroom so can't afford to splash out on one just now, so I thought this might do me for a while to give me extra reach that my binoculars don't manage. I tried it out handheld or resting on the hide window and I was fairly pleased with the results, I can see that it could make the difference in telling one duck from another or one wader from another. I tried it on my tripod when I got home and the stability made a big difference. I think I'll get an adapter for my smartphone too.

I didn't spend that long on the reserve today. Partly because there's work going on at the reserve to sculpt a scrape in front of the reserve. Water levels were really high last week meaning they couldn't do any work, but there was a digger there today. Unfortunately that meant very few birds near the centre. I'm hoping they'll be finished soon and then the birds come back. There was a dog chasing the digger. I don't know if this belonged to a visitor, but normally a dog wouldn't be allowed out on the reserve.

Nothing unusual today. Someone said they spotted a female Hen Harrier but I didn't.

Highlights included a build up of Tufted Ducks on Aird Meadow and on Barr Loch, many more than have been seen on the past few visits. There were also some Goosanders returned to the reserve. On the feeders, a pair of Nuthatch continue to be the highlight. I've seen them on each of my last three visits there. They used to be a hard to find bird but are now becoming just one of the regulars.

Mute Swans are still going around with youngsters in tow, and Whooper Swans were also on show too. A Common Buzzard was the only bird of prey I saw.

It's normally a good place for Treecreeper, but I've still to see one this year.

Yeah I think with Treecreeper you just need a bit of luck to be in the right place at the right time. If it's dry tomorrow I'm going to visit the Botanic Gardens so I'll have a look out for them.

Quiet week trying to avoid the centre and south side due to SEC events. Spent one early morning up the Kilpatrick Braes with great views of Stonechat and a Kestrel perched on the telegraph wire. Today I visited the area around Buchley just north of the canal and had closeups of a Buzzard and a small flock of Redwing (which I see every time I go out at the moment).

Does anyone have any insights into historic Kittiwake reports from the Glasgow area? birdtrack indicates near zero chances in the whole Clyde region but the Glasgow list has a total of 11 historic records (1899-2016). (I'm guessing number of observers is a factor in that discrepancy?).

I'm not aware of any sightings of kittiwakes in the Glasgow area, but maybe the SOC might be able to help? If you're on Twitter you could ask Clyde Birding.

I went to Lochwinnoch this morning. When I left Glasgow there was glorious sunshine, but within a few minutes the clouds started to come over. By the time I got to Lochwinnoch, there was low cloud that kept forming and dispersing, and then for a couple of hours dense fog descended. You couldn't see beyond 10 metres.

One of the benefits of the fog though was that it was so quiet - there wasn't a breath of air. I saw a goldcrest that seemed to with a small flock of long-tailed tits. During moments when the cloud cleared a little, a sparrowhawk could be seen coming back and forth, eventually being chased off by some crows.

Eventually the fog lifted and it revealed an Aird Meadow absolutely heaving with ducks and other water birds. There was a really big build up of ducks over what was there only a few weeks ago, with mallard, tufted duck, wigeon, goosander, goldeneye and a male smew that must just have arrived. There was also a redhead smew that arrived a few days ago, but I wasn't lucky to see that. Other birds on the water included a big build up of cormorants, a winter plumage great crested grebe, and mute swans (no sign of the whooper swans today), some coots and moorhens. Someone had reported a possible American wigeon over the last two days but there had been uncertainty over this. During the moments of densest fog, two grey herons came flying out of the fog together and that was an impressive sight.

Away from the water I saw four different thrushes all in the same view: song thrush, blackbird, redwing and fieldfare (the latter my first viewing since the end of last winter). The fieldfares were chasing the song thrush off which is something I've not seen before.

This is not very exciting, but I saw a pheasant too. This was the first species that I saw on my very first visit to Lochwinnoch when I was a teenager, and I think it was only the third one I've seen since then at the reserve.

Parts of the reserve was frozen, so there were no waders to be seen today.

You must have brought me luck as I got my first Fieldfare of winter this morning, on the canal opposite Bishopbriggs Golf course. That whole section of the canal was frozen over.

Spent a few hours in Helensburgh today, windchill was -3 so the idea was to stay close to cafes. Eider and Goldeneye on the sea and fairly tame Rock Pipits and Turnstones on the shore. One pair of Eider in eclipse plumage (see pic).
View attachment DSC00493.JPG

Pair of Blackcap in the Botanic Gardens this morning in the same bush I saw them in early September. Plus a pair of Great Spotted Woodpeckers drumming in the same field of view. The feeders are getting busier with a Nuthatch and Bullfinches as well as Greenfinches; and a lone Siskin in a flock of Goldfinches in the Aboretum.

I was reading in the latest issue of BTO News that the wintering blackcaps seen here aren't resident birds but migrants from southern Germany. Makes me wonder if all or most of the breeding birds here actually still migrate away, rather than staying put like we used to think.

I took a quick walk to Cuningar Loop today. Not too much about, with highlights being a goosander and a mistle thrush.

The park is being further developed with this new tower under construction. It has a ramped walkway making it accessible and it looks like you'll have views over the tree canopies. 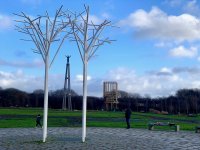 There is a report of a Ring necked Duck at Bingham Pond this morning - nothing like that shows up when I'm there of course.

I spotted that there last year, I think it's the same bird. It stayed quite a while last winter so might be worth going along to have a look. It was mingling with the tufted ducks on the pond, and as it's only a small body of water gave really good views. I think I'll pop along on Saturday.

That's what I figured, the Tufted Ducks are always there I think so its a bit of a drag to keep checking them all.

JTweedie said:
I was reading in the latest issue of BTO News that the wintering blackcaps seen here aren't resident birds but migrants from southern Germany. Makes me wonder if all or most of the breeding birds here actually still migrate away, rather than staying put like we used to think.

I took a quick walk to Cuningar Loop today. Not too much about, with highlights being a goosander and a mistle thrush.

The park is being further developed with this new tower under construction. It has a ramped walkway making it accessible and it looks like you'll have views over the tree canopies.

I hope they know that trees can grow...!
MJB

C
Hello from me in Scotland!