what is this scat (1 Viewer)

this scat is on the cement slab under the feeders daily - we get squirrels, possums, raccoon and skunk. In looking on internet it appears to be none of them but it must be.
this picture has the scat in the middle (sorry it's kind of wet from rain/snow) this is central Ohio. it is gray and maybe 1/2 in around. to me kinda looks like miniature hay? You can kind of get the size by the sunflower seeds around it
thanks
I clean it up daily - it is always throughout the seed on the slab

In Europe I would say it is a pellet of a crow species.
A

thanks for info. We don't get crows very often at feeder.
S

Can't really tell from the photo but as small as you say it is, it's most likely a regurgitated bird pellet.

I've watch Western Kingbirds and Northern Mockingbird spit up pellets but they're oblong and skinnier.

Years ago, I found Screech Owl pellets in my yard. They were about a half inch to an inch round. I think I have a thread with photos on here somewhere, asking your very same question.

You need to break the pellets apart to see what's in 'em. If there's bird feathers it's probably a Eastern Screech-Owl.
A

thank you, will have to check that out, though we don't get owls at feeder. I will need to get a picture of it dry and yes, break it apart to see what is in it thanks
S

It's perching on the feeder at night or somewhere near by.....doing what owls do....not eating from the feeder, that's for sure.
A

I got better pictures. We have fed the birds for year. This is just in the seed/hulls daily on cement slab under feeders. We get raccoons, possums, skunks, squirrels (used to get rabbits and chipmunks but too many stray cats...).
We get many birds but not really big ones too often. We see a hawk or crow sometimes but not daily.
Have just been curious what it could be? thanks
Central Ohio

Did you pull it apart, did you find bones, skeletal remains or feathers?

I can't make out the composite but it looks to be all vegetation; seed husks?

To me, it appears to be a regurgitated pellet; it lacks moisture and form from an intestinal track.

The size is what leads me to a Screech Owl; if there's no feathers or skeletal remains I would likely rule it out. Although, hard shells from insects maybe be present, I would not expect seed husks.

I have no knowledge of regurgitated pellets from your mammals (raccoons, possums, skunks, squirrels), I would think they're all capable of the act but I would not think it's as frequent as the numbers of “dropping” you suggest.

I could be wrong about all this and taken to school wouldn't bother me a bit.

Here's some photos of the Screech Owl pellets. The photo with the penny was taken 6 years ago, it's a photo of a photo that's was taken around 2009. The single pellet photos are the original pellets from the photo, it was taken in 2015. 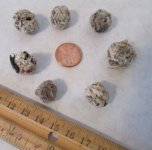 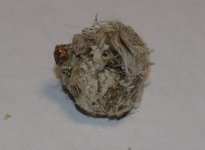 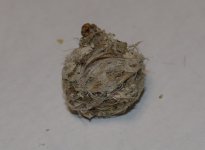 P
No action on Goldfinch feeder loaded with Nyjer - ?