What say you to this serial number, Gentlemen? (1 Viewer)

I have an option on one from the same batch in (presumably unopened) OEM packaging. These are bona fide items from the estate of an Austrian senior officer.
What I find most intriguing is the serial number, especially since I have not been able to work it out at all from the plentyful information provided here by John A. Roberts.

Maybe he or some other cognoscenti can shed light on this, ie. year of manufacture and, by deduction, the nature of the coatings.

Thank you very much in advance. 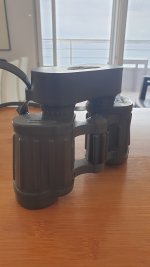 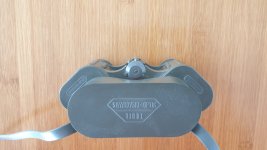 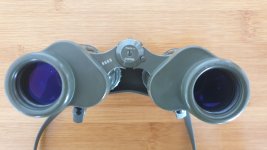 Swarovski commenced commercial production of binoculars at the then newly built factory at Absam in 1948. They initially used different 5 digit number sequences for the various models. However, it did not take long before the numbering started to overlap.

* The sequences remained in use until the start of 1991, when Alpha-Numeric numbering was introduced across the Habicht line (and on all other product lines that were not already using A-N numbering). And conveniently all A-N numbering includes a dating component.


The first RA model, the 7x42 IF was introduced in 1971. Initially 4 digit numbering was used, and then it was mainly increased to 5 digits. However, as more models were introduced, the previous overlap problems reoccured!
See the attached table of RA numbering for the period from 1971 to the end of 1990 (and now incorporating your unit).

In terms of the approximate dating of your unit, it's:
• between 1984 when the new air tight/ nitrogen filled body was introduced (as indicated by the valve cap screws on the bridge arms), and;
• before 1991 when Alpha-Numeric numbering was introduced.
As can be seen from the table, neither the 8x30W or 8x30N were big sellers at the time.


And as a general aid to dating the traditional pattern Porro prism models by their main markings and their main features, see two additional tables.

Thank you very much Sir.

However, in your table entitled "Rubber-amoured Production 1971 to 1994" I find the 8x30W with the New Body only going up to 8824, not to 9669 - or beyond.
In any case your information indicates that the binos in question were from production runs in '90 or '91 and will presumably have 3-layer Swarotop coating, giving them a slightly yellow tinged image.

PS. Of course I will gladly contribute the number on my unit when I receive it sometime in October.
Last edited: Sep 20, 2021

N.B. It must not be forgotten of course, that these bins are ÖBH issue and not the formerly commercially available 8x30 W GAs. Maybe the ones on 'special' order for the military continued longer with the old numbering system or retained a different one. I have no idea how the numbers are on those that are shown in the govt. contact catalog recently shown by Mr. Roberts in a different context.
Last edited: Sep 20, 2021 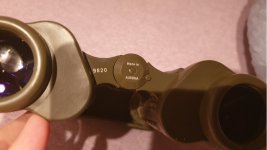 According to a very friendly and helpful woman in Swarovski's service department this one is from 1984 and has Swarotop. She added that it is no longer possible to service it and I am not sure whether that means they will refuse to accept it for repair or, more likely, she meant it will no longer be under warranty, ie. free.
Sadly she would not reveal what exactly the key for the serial number is.
J

Swarovski does not service ex military supply . That's the only reason.
The Dutch Army uses Swarovski and the Dutch Military Optical Repair Department, based in Den Helder, got a training for this in Absam.

Ah, ok. Thank you for that information, Jan.

After further enquiry the woman dated the binoculars from the original post to 1983. She still would not reveal though, what the serial number key was. And yes, she also explained that both pairs would not even be accepted for service. What this means for collectors or their value is moot.
B

There are some really fine optical workers in the Netherlands.

A few days ago there is the Youtube video.

'Why is this strange telescope so tiny' by Huygens Optics.
It is a solid SCT tiny scope made from one piece of glass with aspheric front, coma corrector at the back and ray tube.
Made by a master Dutch optician. Two examples taking months each to make by hand for a space programme. Focal length 300mm despite being tiny. To resolve small buildings from space.
The first example was made in 1993.
Normally they take a week to make if not needed for extreme accuracy.

However, an Argentine lens designer made a Solid Cat lens in maybe the 1970s. First when at a US top firm, later sold as the Vivitar Series 1 solid CAT in 800mm f/11 and 600mm f/8 versions.
What is remarkable about these solid lenses is the ability to go from plus 22C to below zero with almost no change in performance at 180x visually.

The old Tolles eyepiece is also a solid piece of glass.