Heard a Cuckoo during this morning’s Dawn Chorus.

Nightjar on Wednesday (flushed it during the day day and it perched not very far away so I got some nice pics!).

Real Warbler migration is gearing up...had 7 species between two sites this morning, along with some good sparrows including Field and Savannah.
A

A couple of U.K records of Honey Buzzards so far. Does anybody know the earliest date on record? There are always a few really early reports of Honey Buzzard but obviously some are mis id'd.Also obviously not a spring migrant, but how unusual date wise is the Little Auk record from this week ( can't remember where from Scotland somewhere) ?
H

14 April - singing Redstart in my patch, they are passage birds but used to breed about 20 years ago in the area - a first for 2022 and first male singing on patch ever. First Swallows of the year too.

26 April - first Dunlin, Common Sandpiper and Wall Brown of the year on my patch

So far Ring Ouzel, Whitethroat and Cuckoo have eluded me!
Last edited: May 2, 2022

As well as hearing it I did actually see a Cuckoo yesterday fly past.

This past week I've had a lot of migrants, including ten warblers on Sunday. Most notable were lifers Lincoln's Sparrow, Veery, and Least Flycatcher. Also got county record early Cape May and Canada Warblers (according to eBird).

A late Red-breasted Nuthatch and a lifer Summer Tanager today.

Honey buzzard and red backed shrike on Saturday...Typically the last spring migrants to arrive here. Now waiting for Eleonora's falcons in early June (oddly they didn't see any at the local migration survey camp, they usually get a couple of these in late spring).
Will we have some late spring surprise this year (thinking about black headed bunting or lesser grey shrike especially) ? Will there be another rosy starling influx ? Maybe
It was a pretty good season already anyways !
T

First American Redstarts of the year, seen while on campus this morning of all places.

Mysticete said:
Had some time before a meeting this morning, and a worm-eating warbler had been seen at a nearby park. Excellent birding decision to visit that park. While I didn't get the worm-eating warbler, I did get 3 species of vireo, 5 species of thrush, and 20 species of warbler, including my first Mourning for Wisconsin. Probably the best warbler numbers I have had in years: You know you are in for a treat when your 4 species of warbler before you even get out of the car after parking!
Click to expand...

Got home and someone posts a photo of a Kentucky Warbler from the same spot, a potential lifer, and a half hour after I left! "Shakes fist in the air uselessly"
A

It's really shocking how scarce cuckoos are becoming in the U.K. Obviously there are a lot of places that you are guaranteed to spot one but the numbers seem to be decreasing every year. Are they going the same way as Turtle Dove and will get reported on the rare bird services within a few years?

Highlights of the past week have included a Kentucky Warbler sitting up in plain sight and singing, Least Sandpiper, Acadian Flycatcher, and a silent Traill's Flycatcher (either species would have been a lifer...)
M

I started out on the deck at 6:30 with a nice cup of tea. The trees were dripping with Warblers. Newly arrived Baltimore Orioles were competing with the 3 pairs that have been here a week trying to outcall each other. A load of birds came in last night obviously. It was supposed to rain starting at 10AM but it actually brightened up so I set the blind up at the waterfall and hung out in there until 4PM. 5072 images later I'm still going through them I got 3 new ones for the yard, Hooded, Worm-eating and Blue-winged so it was well worth it, exhausting but worth it. I ended up with 73 species of which 18 were Warblers. 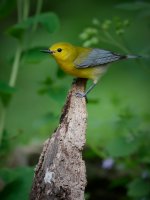 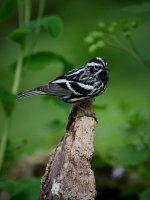 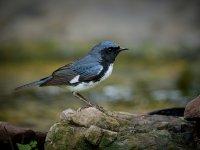