Where, when, and how to see these birds? (1 Viewer)

There are a few birds that I've glimpsed at times, but would like to have a better look at. I'm not sure of the best way to find these, aside from going back to the same place at the same time of year.

May last year, I saw a bronzed cowbird with its unwitting foster parent, a starling. I only saw it briefly, but the red eyes and the striking feather ruff made an impression. They look like a bird that a villain in a cartoon would have as a pet. This was at San Gabriel park. I haven't seen one up close since, but think I saw a flock that included some, a month later. I was in the car and sadly couldn't stop.

October last year, I saw some lesser goldfinches along the brush between Blue Hole and San Gabriel park. Any thoughts on where to spot these again? Do I try the same spot?

I saw a female red-winged blackbird, December last year, at Berry Springs. I'd like to see a male. Do I go and check around the reeds and bushes near the water, hope for the best? Do they have particularly nice colors at any time of year?

For several months last year, there were yellow-crowned night herons nesting in my neighborhood. I've never seen them outside that. Would I be able to see these anywhere during the day, or are they strictly nocturnal?

I see caracaras frequently while in the car, as they perch along the side of the road. Is there anywhere I can consistently find some, in order to look at them properly instead of at highway speeds?

I adore kinglets. I've seen a few of them, briefly, at various times of year. I would love to see more. Is there any particular habitat or time that would be best to check?

Lastly: hummingbirds. I see them occasionally, never for very long. They seem to like the Texas red yucca plants in every H-E-B parking lot. My plan for these is to go to Zilker botanical gardens and sit near a likely patch of flowers. What time of year is best for Texas hummingbirds, and how close can I sit without scaring them? They're incredibly fearless- I know multiple people who've had a hummingbird come and inspect a brightly-colored clothing item, and when my mother was young, she had a hummingbird follow her around because of her bright red hair. How far away do I have to be for them to completely ignore me?

I had to look up the locations you mentioned. There might be more responses if you added that you were near Austin.
That said, I've never birded in your area, just south and west Texas. Lesser Goldfinches are seedeaters and more likely to be around thistle and other seed producing plants in meadows or, as you say, brushy areas. Red-winged Blackbirds are definitely connected to wet areas such as marshes, especially where there is tall vegetation such as reeds and cattails. They'll be at their best in the spring when the red epaulets are on display for the female to swoon over. Yellow-crowned Night Herons are often spotted roosting during the day. On one cool morning, I saw a great number gathered in a sunlit tree, catching the morning sun for warmth. As an easterner, I'm not an expert on finding Caracaras but I tend to see them in open areas like other raptors. The last I saw were in the landfill at Brownsville. I don't know if you get Golden-crowned Kinglets but I would think they would be more a winter species and tied to evergreens. Here in North Carolina, I see them most frequently in hemlocks, hollies and pines though in deciduous trees as well. Ruby-crowned Kinglets would also be a winter species in the southern US. In our yard, we see them typically at mid level or lower and in willows or brushy habitats. Learning the high pitched, three note call of the Golden-crowned or the quiet 'jidit, jidit" that the Ruby-crowned makes is very helpful to know that they are nearby. Both can be quite friendly/fearless and a bit of pishing may bring them in too close for binoculars.
You Texans have us beat for Hummingbird variety. Try a setting out a sugar water feeder. My guess is you won't have any trouble getting them to visit. They are also fearless so you could quickly graduate to holding the feeder while they sip. Really! We've done it without trying very hard.

I've been looking around since then, and have had some good luck. I found another lesser goldfinch, though only saw it briefly, in someone's backyard. Interestingly enough, my new Sibley guide says lesser goldfinches aren't quite found in my area, only somewhat West of me. But I definitely found goldfinches. Little birds with black backs and yellow bellies, some white on their backs. I wonder if they've moved since the guide came out in 2014?

I found some red-winged blackbirds, too. If anyone is trying to bird around Austin and Georgetown, there's a place called Mankins Crossing. It's a little historic bridge, that seems to be good for birds. It has plenty of INaturalist sightings, including waterfowl and two species of vulture, and I found red-winged blackbirds there. Spotted my first male. They're smaller birds than I had thought.

Oh, are night herons mostly a morning bird? I may not see much of them, then. Maybe I can get lucky near a river.

I found more ruby-crowned kinglets, too! To anyone coming through the area for birds: you absolutely have to check out Berry Springs. A patch of forest, featuring a decent-sized pond, near a prairie restoration area. Tons of INaturalist sightings, and I've seen some of the diversity there for myself. It's open enough to socially distance well enough, if you're careful on some of the paths. There have been a few golden-crowned kinglets sighted there (and you're right, they're all from the winter), so I plan to go back and keep looking.
I was delighted to learn that ruby-crowned kinglets are bold and curious, and will come right up to you if you stand still. I got a very good look at one as it flittered back and forth across the path, at least until it spotted another male and shot off. My new goal for ruby-crowned kinglets is to get a nice photo of one with its crest raised, and my goal for golden-crowned kinglets is to photograph one, period. 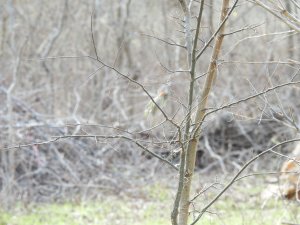 Two male kinglets found each other, and a great deal of flickering of crowns ensued. Unfortunately for me, it was at very high speeds, while hopping wildly from branch to branch, so I never had the camera on one when it had its crown up. This is...

www.birdforum.net
This is not a technically nice photo, but I like it. It accurately demonstrates what kinglets are like to photograph.

For the hummingbirds, do you suppose it would be possible to get some to a held feeder, without prior training? I have some periodic fatigue issues that would interfere with keeping a sugar water feeder clean enough, so don't want to make a feeder a regular thing. But I had considered taking a small feeder to a likely hummingbird feeding spot and setting it in front of me. I assume any hummingbirds familiar with feeders would recognize it, and they seem bold enough to come to one regardless of me being near it.
You must log in or register to reply here.

How Many Genera Have You Seen?
2 3

V
Hobby superstitions, or how I got to see a cool bird in my backyard