Dear birders
On Friday 2nd April, en route to Biratnagar airport, after a few days birding Koshi Tappu, I visited, in the heat of the day, Barju lake, this is labelled as Chimadi lake on Google maps and is about 10km due west of Biratnagar and about the same distance north and east of the Indian border.

At Koshi Tappu I saw many lesser whistling ducks and had seen reports of fulvous at this site. I found the place to be fabulous with lots of species that are hard to find in Nepal such as pheasant-tailed jacana. There were over 200 whistling duck present, the light was against me and they were always distant. I have been queried by Ebird on my record of fulvous and would be grateful for your opinion as to their ID. Having spent much time looking at the photos my view is most (if not all) are fulvous rather than lesser. I am very familiar with lesser from Malaysia and these are too dark on the face, too fulvous on the side, do not show the distinctive yellow eyering of lesser, have a different head shape and some show the side plumes (in some cases as much as plumed WD).
Grateful for your considered views. Again, my aplologies, these are the best images I have.

mjgrunwell said:
I have been queried by Ebird on my record of fulvous ... my view is most (if not all) are fulvous rather than lesser. I am very familiar with lesser from Malaysia and these are too dark on the face... [etc]
Click to expand...

Agree with Joern. All, or certainly the great majority, and all the ones that can be seen at all well, are lesser whistling duck. I'm not clear why you've not mentioned any of the key features for lesser that distinguish it from fulvous: greyish neck, lack of hindneck stripe, chestnut wing-coverts and upper tail-coverts - as the great majority of your birds do show these features - prominently so in many of your photos.

The most important feature to distinguish Lesser and Fulvous WDs is the colour of the uppertail covets and lower rump - chestnut-red in LWD and white in FWD. LWD also has a darker blackish-brown crown and hindneck than FWD overall, but it seems that lighting and individual variation makes this feature somewhat less reliable in the field. Although most if not all the ducks in your pics are LWDS, try checking any other pics that you took around the same time as the pics labelled fulvous8 to fulvous10 were taken as those more reddish ducks in the pics do seem to lack the LWD's blackish crown and hindneck. Check in the other pics to see the colour of the upper tail covets can be seen.
M

Thank you for your help on this, I must admit to ignorance on the key feature of upper tail covert colour.
Looking again I must agree that most are lesser, the back view on lesser20, below clearly shows the chestnut red. The bird on the right in ful20 is clearly lesser but the upper tail looks white on the bird on the left? Can we agree that at least a few are fulvous? 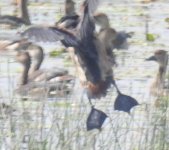 Looking through all the photos again, I don't see any birds that make me think they might be fulvous whistling-duck. Some have their flank-feathers ruffled right up and look different because of that (and it may also be hiding the uppertail-coverts), but they don't look necessarily like a different species. Note also that fulvous is 25% longer than lesser and might be expected to show up in that way too - but doesn't.