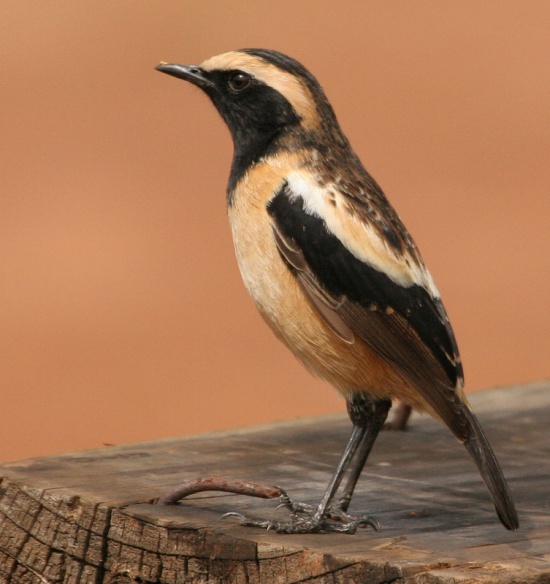 Length 16-17 cm, mass about 33 g
Adult male: The face, throat and upper breast are black. Distinctive buff eyebrows extend to the forehead and down the sides of the neck to the orange-buff lower breast and belly. The scapulars and rump are also buff. The crown, nape, mantle and back are dark brown.
Adult female: The upperparts are brown with dark streaks. The pale eyebrow is indistinct, the rump is buff, and the tail black. The underparts are cinnamon-buff with darker streaks on the breast.
Juvenile: Similar to the female, but spotted above and scaled below. 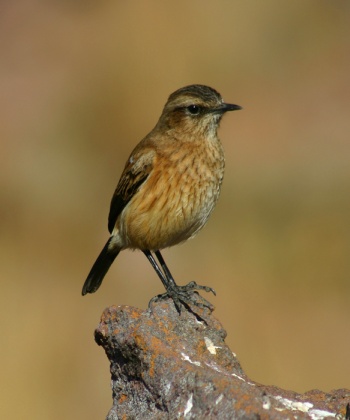 The taxonomic status of this species is uncertain; it has been placed in Saxicola, Oenanthe and Campicoloides recently (Lepage, 2007[2]).

Solitary, in pairs, or in small groups.

Food is mainly invertebrates, but includes seeds and (rarely) nectar. Prey is taken both on the ground and aerially, often from a perch on a rock.

A co-operative breeder, young birds help their parents feed subsequent broods. Nests are built mainly by the female at the base of a rock or in a crevice. Eggs (usually 3) are laid September to February.

Search for photos of Buff-streaked Chat in the gallery