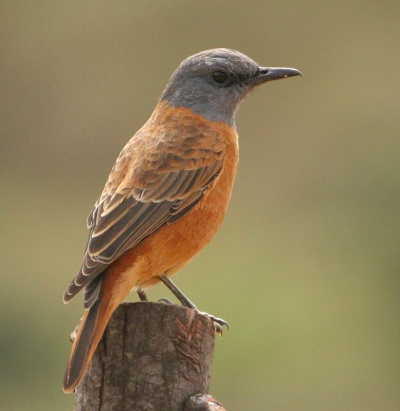 Length 21-22 cm (8¼-8¾ in), mass about 60 g.
Adult male: Blue-grey head and throat contrast with rufous-orange underparts. Upperparts are mostly dark brown and rufous. The bill is black, the eyes brown, and the legs brown to black.
Adult female: Similar to the male, except that the underparts are duller and the head is mainly brown, streaked black, with white markings on the face and throat.
Juvenile: Brown with buff mottles above, and rufous with black mottles below. 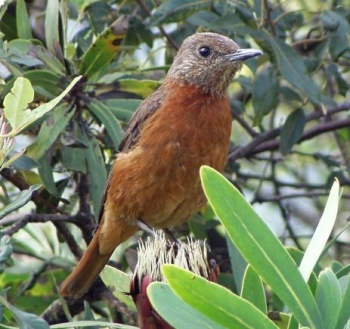 The male Sentinel Rock-Thrush is similar to the male Cape Rock Thrush, but the blue grey of the head extends to the back and upper breast. The male Short-toed Rock-Thrush has a blue-grey back and a whitish crown.

Eastern and southern South Africa, Lesotho and Swaziland. Some altitudinal migration in populations that breed at high altitudes.

Solitary, in pairs, or in family groups. Attracted to burnt vegetation. Perches on rocks, shrubs or poles to sing or when alarmed. 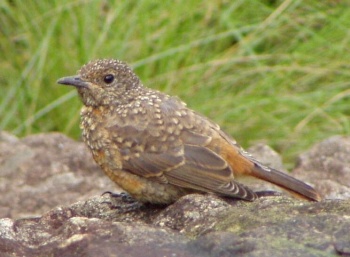 Forages mainly for invertebrates on the ground; also eats seeds and fruit.

The cup-shaped nest is built in a crevice or on a ledge on a cliff or building; Two to four eggs are laid in summer (September to February).

Search for photos of Cape Rock Thrush in the gallery