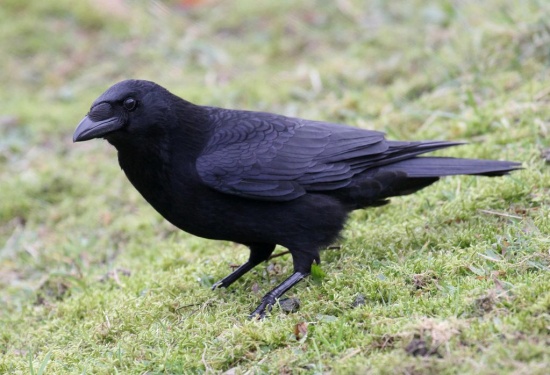 Sexes similar, juveniles with duller plumage and pink gape when bill open. Hybrids between Carrion Crow and Hooded Crow occur regularly in a narrow band where their ranges meet. 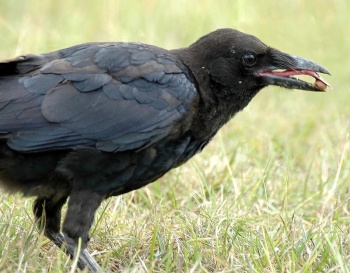 May be confused with young Rook. The shape of head and the flight are quite different. Large-billed Crow has steeper forehead, more dome-shaped crown, and more rounded tail.

Most of western Europe and a disjunct population (perhaps a separate species) in central and eastern parts of northern Asia.
Common or abundant in most of its range despite persecution by gamekeepers and farmers.

Was formerly considered conspecific with Hooded Crow, which occupies central Eurasia inbetween the two subspecies of Carrion Crow. Precise relationship between the three taxa not yet settled, and possible that either Hooded may be re-lumped, or C. c. orientalis split as a third full species. 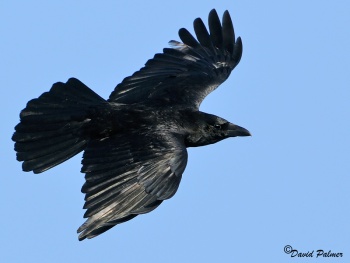 Ingenious adaption to urban environments and intelligent. Can be observed sitting on top of traffic lights and dropping hard-shelled nuts onto the streets below so to make use of the crushing effects of traffic; and will wait to retrieve the contents at a 'red' signal. 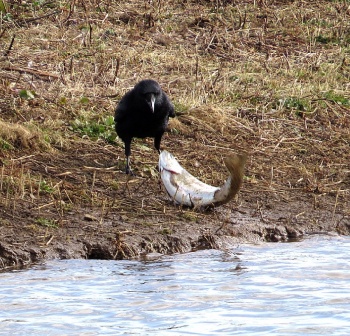 Has been observed taking a live fish out of the water. Extra pictures and discussion[2].

Breeding season generally in northern spring. A pair often stays together over several years and throughout the year. Usually a solitary nester. The large nest is built by both sexes and is made out of sticks. It's usually placed high in a tall tree. Nests on buildings, electricity pylons or cliffs are also known. Lays four eggs. The chicks leave the nest after 32 days.

In some parts of the range Great Spotted Cuckoo may parasitise the nest.

Search for photos of Carrion Crow in the gallery

Threads about taxonomy of Hooded and Carrion Crow: