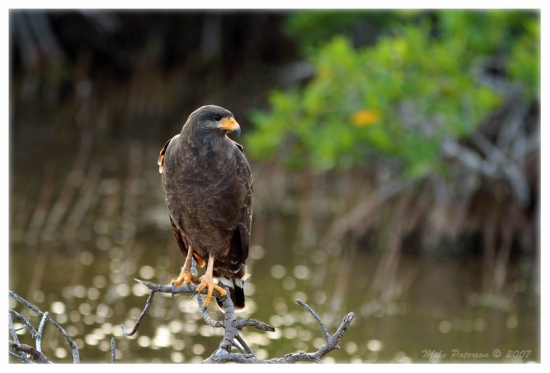 Endemic to Cuba and Isle of Pines.

This is a monotypic species[1].
Formerly classified as a subspecies of Common Black Hawk.

Mostly near coast in and adjacent to mangrove forest; less often seen on sandy beaches. Mainly in lowland near swamps and small islands, both in coastal forest and more open areas.

Flight: likes to alternate flapping and gliding, even though it can soar.

Nests from January through June. Seven of eight nests examined from mid- to late May 1996–1998 contained eggs, and one had a nestling.

Scans for prey from perch in tree or from ground. Feeds heavily on crabs, also fish carrion, rodents and lizards.

Search for photos of Cuban Black Hawk in the gallery