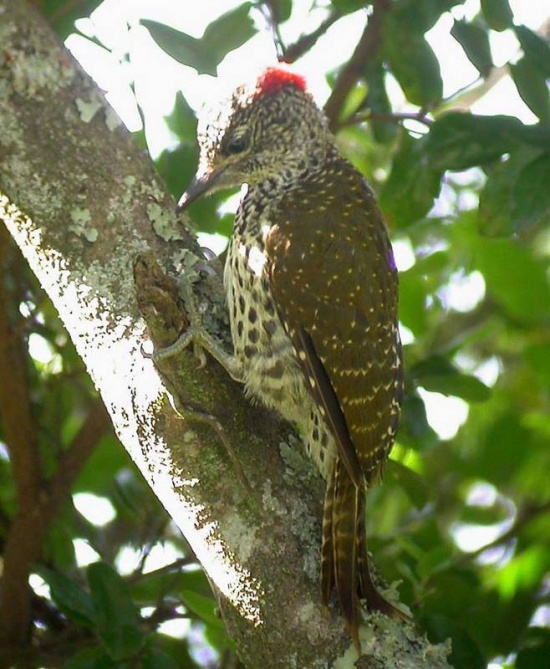 Male: The forehead and crown are black speckled red, and the nape is red; the malar stripes are dark red with black spots. The lores and ear-coverts are off-white with black spots. The wings, rump and back are olive-green with sparse pale yellow speckles on the back. The wings are barred pale yellow. The tail is olive with yellowish bars and golden-yellow shafts. The underparts are off-white with large black blotches (diagnostic). The bill is black, the eyes dark reddish brown and the legs and feet are dark grey.

Female: Similar to the male, but with an olive forehead and crown that are spotted pale yellow, a malar stripe that is black speckled white, and a shorter bill.

Monotypic, although birds of the coastal forests are darker and smaller than those of the more arid interior.

Resient and territorial; usually in pairs. Joins mixed-species feeding flocks. Forages for ants and termites in trees, mainly in mid-canopy.

Breeding: Monogamous, soliatry nester. The nest is a hole excavated, usually in a dead trunk or branch, 1-6 m above the ground. Two to four eggs are laid August to November. Parasitised by Greater Honeyguide and Scaly-throated Honeyguide.

Search for photos of Knysna Woodpecker in the gallery