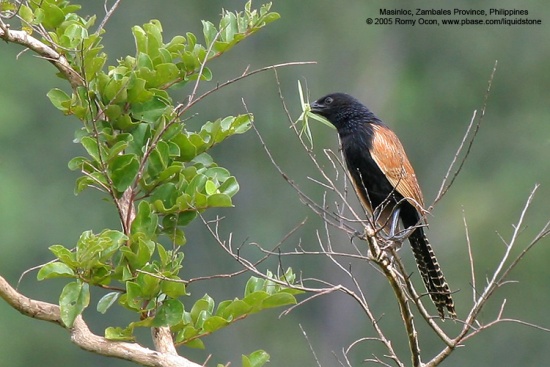 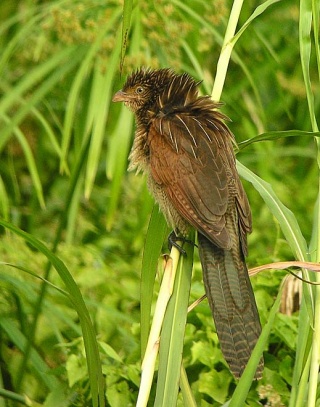 Sexes alike, females larger. Juveniles are dark brown above, light rufous barred, streaked rufous on head and back, have buffy-white shaft-streaks and are whitish buff below with paler shaft streaks and bars.

From India est to southern China, Indochina, Malaysia, Sumatra, Borneo, the Philippines, the Lesser Sundas and Moluccas.
Common in suitable habitat in its range.

Has been considered conspecific with Black Coucal and Madagascar Coucal.

Open grasslands, both dry and marshy. In more open habitats than Greater Coucal.
From lowlands up to 1800m.

Feeds on large insects, frogs, lizards, snakes, fruit. They hunt these among the undergrowth, using their powerful bills to catch and kill their prey.

Breeding season starts in India after onset of rains In June, December to July in the Malay Peninsula. They build a large globe nest made of twigs or grass (blades and stems) with a large entrance hole to one side. The nest is sometimes lined with green leaves and grass. 2-4 white eggs are laid. Both sexes incubate and tend the young.

This is a resident species. Locally perhaps only a summer visitor, e.g. in Nepal.

Search for photos of Lesser Coucal in the gallery