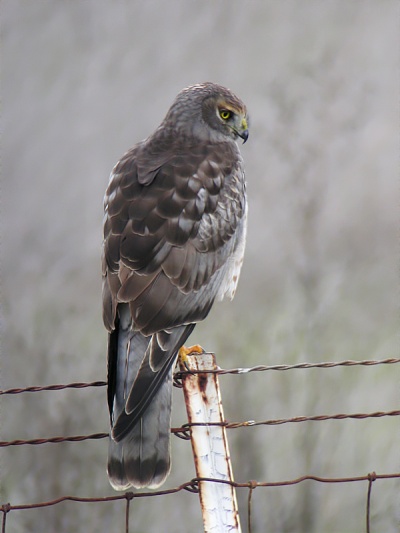 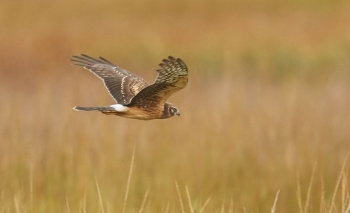 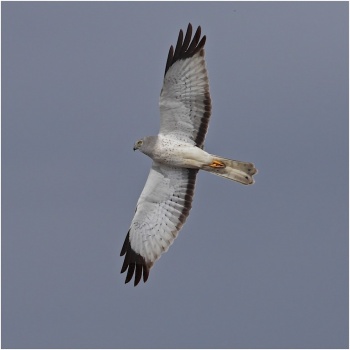 None within its normal range. See Hen Harrier for distinction from that species in Europe where Northern Harrier is a rare vagrant. Southernmost wintering birds in the far north of South America need to be distinguished from Cinereous Harrier; that differs in males with more heavily orange-brown streaked underparts.

Widespread in the North America, breeding over most of Alaska except the far north and Canada south of the tree-line. Also breeds over much of the western and northern contiguous 48 states of the USA except for the south and south-east USA. Southernmost breeding limit is northern Baja California. Winters from southern Canada and throughout the USA, and from Mexico to Panama, rarely the Caribbean, Colombia and Venezuela. It has also occurred as a vagrant in the Azores, the Faroes and in Britain.

Formerly treated as a subspecies of Hen Harrier in older versions of Clements and IOC, and still so by Howard & Moore[7], but now split into two separate species in view of the distinct morphological and ecological differences between the two, and the discovery that Northern Harrier is genetically closer to the South American Cinereous Harrier than it is to Hen Harrier[1][2][3][4][5]. 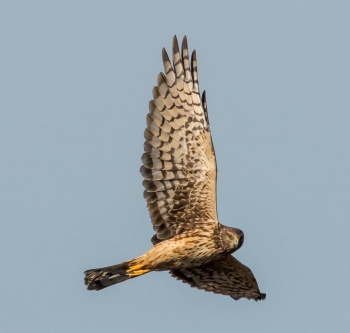 Breeds in marshes, grasslands and heathlands, sometimes in mountains, often in cultivated areas.

Like all harriers, hunts using a low, slow flight over the ground, with their wings held in a shallow "V", then plunge onto their prey.

They build a nest of sticks and grass on the ground in thick heather, grass or shrubs. The clutch consists of three to six eggs which are incubated by the female for 29 - 31 days, fledging after about a month later.

They take 2 - 3 years to mature, but may attempt breeding in their first year.

Search for photos of Northern Harrier in the gallery

Search for videos of Northern Harrier on BirdForum TV