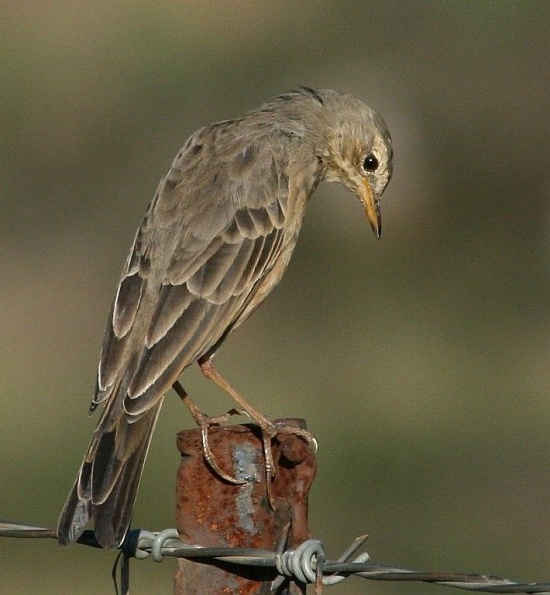 Length 17 cm, mass 23-30 g. Distinguishing features of this Pipit are a fairly dark brown, unstreaked back, buff (rather than white) outer tail feathers, and a yellowish base to the lower bill. The call is a loud, clear 'chrrrup-chereeoo'. The tail is seldom raised above the horizontal when pumped or wagged. It is very similar to the Buffy Pipit, but the Plainbacked Pipit has darker upperparts and more distinct breast markings. The call and tail-wag are also useful in identification.

Sub-Saharan Africa. Many populations are resident and sedentary, but some move from high altitudes to lower altitudes in winter.

Anthus leucophrys has 9 subspecies, based mainly on variation in plumage colour and small differences in wing length:

It is found either singly, in pairs or in loose flocks in areas with short grass or shrubs interspersed with bare ground, particularly areas which have been overgrazed or burnt. This includes short grasslands, short shrublands, the margins of wetlands and wooded areas, and fallow fields.

It occasionally perches on rocks and low mounds. When walking it adopts an upright stance and has a somewhat deliberate tail pumping action when standing still. Its diet consists mainly of insects and their larvae but it will also eat other invertebrates and seeds.

Search for photos of Plain-backed Pipit in the gallery