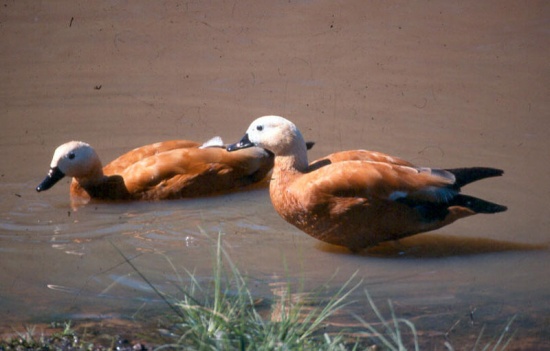 Adult male: Has a grey head and neck, and a russet and brown body. The folded wing has a white panel (coverts), a green panel (secondaries) and black primaries. Eyes are dark brown, and the bill, legs and feet are black.

Endemic to southern Africa. Most abundant in southern and central South Africa (Western Cape, Eastern Cape, Northern Cape and southern Free State provinces). Distribution extends to Namibia, south-eastern Botswana, the Lesotho highlands and most of the rest of South Africa (west of 30°E and south of 24°S).

Forages in wetlands for aquatic plants (including algae) and invertebrates, and in crop lands for maize, sorghum and wheat seed.

Breeding: Monogamous and territorial. Nests in burrows (usually Aardvark burrows); this may be an adaption to the sparse vegetation near wetlands, or to high daytime temperatures, in the arid core range. Six to fifteen eggs are laid March to December (peak in July-August).

Search for photos of South African Shelduck in the gallery