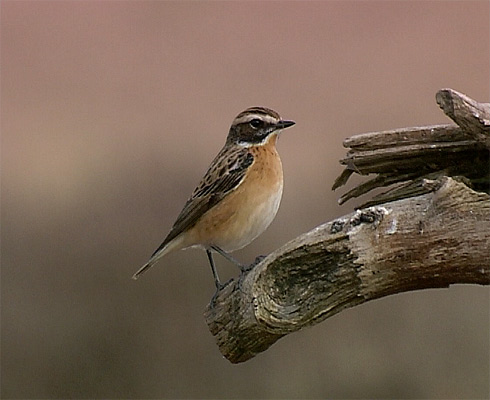 12–14 cm (4¾-5½)
It has a prominent white supercilium. This bird is streaky brown above and warm orangish-buff on the breast. White wing patch and tail base. Black bill and legs.

The most similar species is the White-browed Bushchat of northwestern India, but the two species rarely (if ever) overlap in range. European Stonechat and African Stonechat both occur with it (at different times of year), and can be distinguished by 'dumpier' shape with shorter wings, lack of a supercilium, and lack of white patches at the base of the tail. Siberian Stonechat is more similar in wing length and shape, but also lacks the supercilium and white patches at the base of the tail. 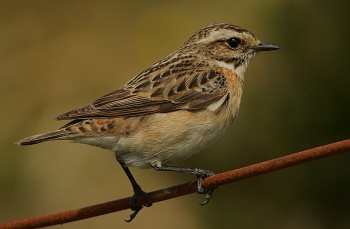 Breeds across most of Europe and western Asia. In Britain it now breeds primarily in upland areas of the north and west, though formerly also widespread in lowland areas of the south and east. Scarce in Ireland. In Iberia, breeding is largely restricted to mountains in the north; rare in Portugal, more widespread in northern Spain. Much more widespread, and often abundant, in the rest of Europe between 44°N and 68°N latitudes, and east to around 85°E longitude in the Novosibirsk region of Russia. Smaller numbers also in the Balkans, and a separate population breeding in the Caucasus and the mountains of eastern Turkey, Armenia and Georgia. Abundant on passage in the Mediterranean and the far southwest of Asia. Winters in central and southern Africa, from Senegal east to Kenya, and south to Zambia. 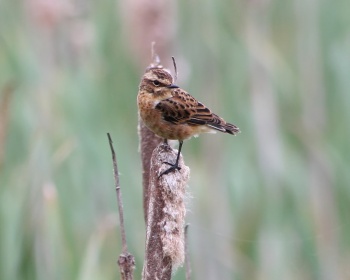 Breeds on damper areas of moors and heaths, particularly with low bushes, gorse etc. On passage may be seen on railway embankments and cultivated fields. The population has crashed in much of northwestern Europe due to agricultural intensification.

Hops or runs on the ground and often perches on top of low bushes. Flitting flight. Flycatches from perch. 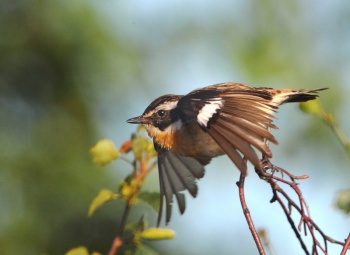 The diet includes insects and their larvae, also seeds and berries.

The female builds a nest from dead grass and moss, lined with fine grasses and hair, usually on the ground among tall grass on moors and heaths. The 4-7 smooth, glossy, light greenish-blue with reddish-brown speckling eggs are incubated by the female for 13-14 days. Both adults feed the young, which fledge after a further 14 days.