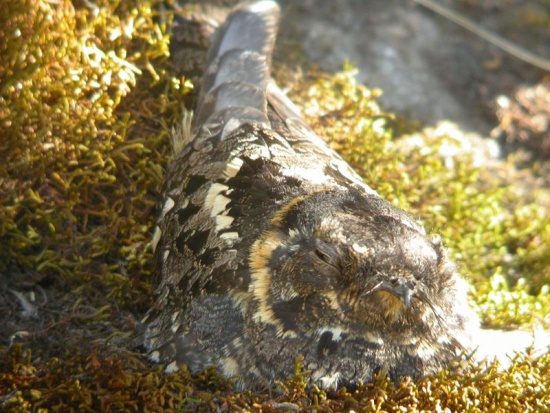 Immatures are paler than adults and often more rufous.

Darker and browner than Fiery-necked Nightjar and Black-shouldered Nightjar.

Africa: found from south-western Saudi Arabia to Eastern and Central Africa south to Zambia.
Locally common in its range.

Three to four subspecies are recognized which were formerly split into two species:[1]

Feeds on moths, beetles and grasshoppers.
Forages by hawking for prey above fields and pastures, in open woodlands and large suburban gardens. Has an extremely agile and rapid flight. Feeds also in insects attracted to artifical lights and fires.

Poorly known. A monogamous and territorial species. Nests in small clearings at or near base of a tree or a bush. No nest built, the eggs are laid on bare ground or on leaf litter. Lays normally 2 eggs.

Probably sedentary in Africa. May move to lower altitudes in winter in Saudi Arabia.

Search for photos of Montane Nightjar in the gallery