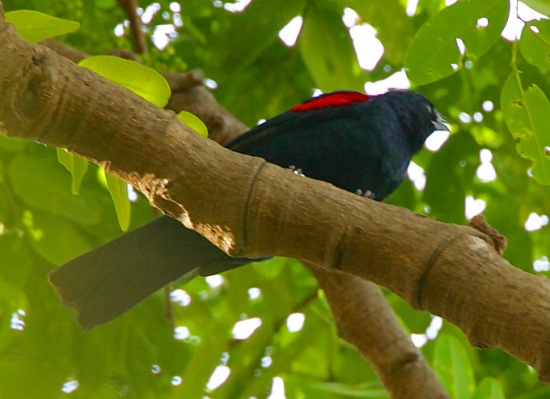 The male is a medium-sized glossy blue-black bird with a bright scarlet shoulder patch. With good views a small yellowish wattle-patch can be seen at the gape whilst small yellow patches may be apparent at the base of the legs.
The female is a dull olive-green bird with yellow-fringed wings and white underparts with dark barring.
Immatures are similar to, but generally darker than, the females.

With poor views (the norm!) the female could be confused for a female Chrysococcyx cuckoo or even a female Golden Oriole.

This species is quite widely distributed through gallery forest, moist Guinea savanna forest and rainforest from West Africa south through the Congo basin into Angola and east into Uganda, Western Kenya and Western Tanzania.

This species is a sexually dimorphic arboreal bird which shares behavioural features with both Drongos and Bush-Shrikes though is not related to either.

A skulking species which tends to remain within the canopy cover feeding in pairs or occasionally family parties.

They glean caterpillars and large insects from the upper canopy and occasionally make short flycatching sorties.

Breeding is usually at the end of the wet season, the nest being placed high up in the fork of a tall tree in good canopy cover.

This is not a vocal species with the male preferring sartorial display to elaborate song though feeding birds use contact calls.

Search for photos of Red-shouldered Cuckooshrike in the gallery