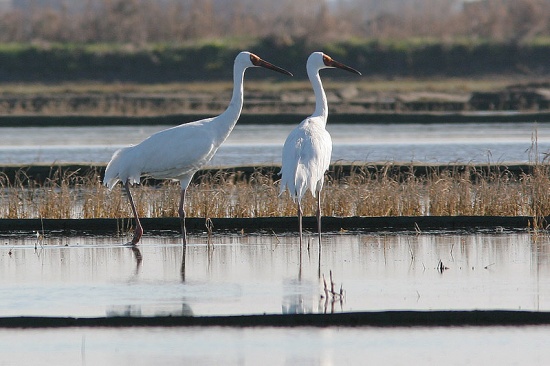 140cm. Adult crown, forehead, face, and sides of the head are bare of feathers and brick-red. Pure white with black primaries. Red or pale yellow eye, red pink legs and toes. Sexes similar, although males tend to be slightly larger in size and females tend to have shorter beaks than males.

Juvenile heads and necks are rusty buff, buffy brown plumage, with paler throat and chin. Siberian Crane chicks have blue eyes at hatching, but eye colour changes at about six months of age to yellow

A monotypic species.
Formerly placed in the genus Grus.

2 eggs are laid and incubated by both parents for about 29 days.

The diet is varied. On the breeding grounds in spring, they eat cranberries, rodents, fish and insects. They dig in wet soils. On migration and on the wintering grounds, they excavate roots and tubers from wetlands. They are predominantly vegetarian outside their breeding season.

Search for photos of Siberian Crane in the BirdForum Gallery