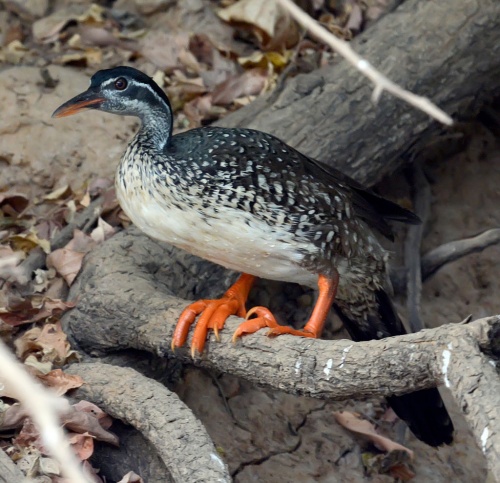 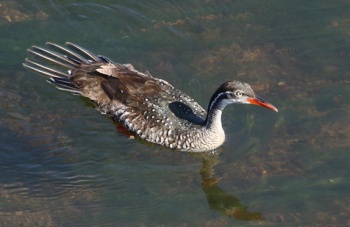 35–59 cm (13¾-23¼ in)
The breeding male has rather dark upperparts body plumage with pale spangling and slightly paler underparts. The foreneck/hindneck are often contrastingly bicoloured with a thin grey line running from the eye down the side of the neck. The daggerlike bill is bright red, the stiff tail long and dark whilst the legs and feet are bright orange-red.
The female is an altogether paler bird with a red-brown beak, darker hindneck whitish on the lores, chin, throat and foreneck. There is a brown area extending down the neck from behind the eye thickly edged white and the female thus seems to have a more prominent neck/facial pattern.
Immatures resemble females but are much duller in the face/neck.

Very little is known about the behaviour of these birds which favour the aquatic fringes of riverine forest, woodland streams and dense mangrove forest.

Finfoot swim with a neck-pumping motion when relaxed but if disturbed swim fast and direct to the nearest cover with the slightly kinked neck almost flat on the water. They also climb and clamber well despite their large orange finned-feet.

They eat a wide variety of insects and their larvae, including grasshoppers, mayflies, spiders, beetles, dragonflies and millipedes.

Apparently these birds nest in tangled roots or creepers low over the water producing only 2-3 young which seem to be cared for mainly (exclusively?) by the female.

Finfoot are rarely vocal but adult males have been reported to produce a loud roaring boom though this remains to be substantiated.

Search for photos of African Finfoot in the gallery

Search for videos of African Finfoot on BirdForum TV