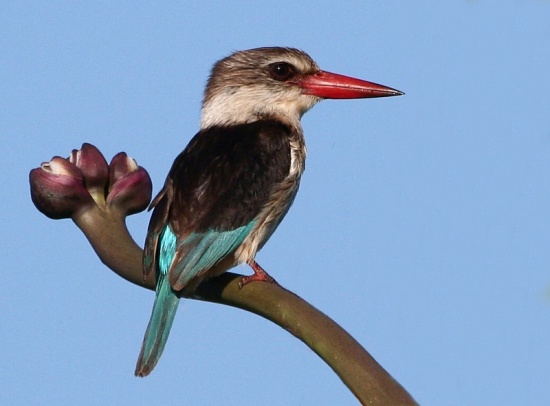 Length 22-24 cm, mass 60 g
Adult male: The crown and nape are brown with pale streaks, the eyebrow is whitish, and there is a dark stripe through the eye. The back and sides of the neck and upper mantle are buff, contrasting with a darker upper back. The wings are black and turquoise, the lower back and rump are azure, and the upper tail is blue. The chin is white, and the throat and belly whitish. The breast and flanks are pale brown with darker streaks.
The bill is red, tipped brown, the eyes dark brown, and the legs and feet are orange-red. 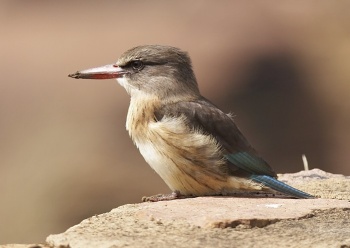 Adult female: Similar to the male, but with dark brown (rather than black) upperparts.
Juvenile: the bill starts as all brown

Up to six subspecies are recognised, varying mainly in the colour of the underparts and crown and in size. Clements recognises four:

Subspecies H. a. erlangeri and H. a. hylophila are generally considered invalid[3].

These Kingfishers do not feed on fish but eat mainly insects and lizards and sometimes young of other birds. Usually solitary or in pairs.

The call is a descending trill 'Ki-ti-ti-ti' (can be interpreted as 'pity for me') repeated rapidly up to 20 times.

They will breed in holes in trees or banks, from September to December (in southern Africa); Two to five eggs are incubated by the female for about 14 days.

Search for photos of Brown-hooded Kingfisher in the gallery