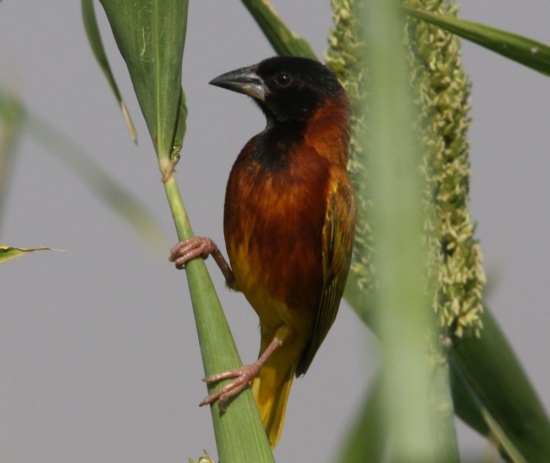 Male: Black hood covering much of the head and bib. Underparts cinnamon-chestnut, with varying amounts of yellow on the belly and vent. Mantle cinnamon-chestnut with some yellow streaking. Flight feathers and coverts edged with yellow. Dark eye and bill. Pale flesh legs.

Female: Cave and MacDonald (1955) describe the female as "Above, streaky brown and cinnamon with olive head and yellow eyebrow. Wings broadly edged with pale yellow. Below creamy white, rather richer on breast".

In the south-eastern part of South Sudan and by the Ethiopian border in Sudan, confusion could be made with male Chestnut Weaver, which has a similar (though less extensive) dark hood and chestnut colouration. However, it lacks the yellow on the belly and yellow edging to the flight feathers of Cinnamon Weaver and has a red eye. In the same areas, Yellow-backed Weaver could be a confusion species and in the south of South Sudan Golden-backed Weaver could also be a confusion species. Both of these species have yellow mantles, plus Yellow-backed Weaver has a yellow nape and Golden-backed Weaver has a red eye.

Eastern Africa: found in Sudan and South Sudan (Nile tributaries south to the borders with Uganda and the Democratic Republic of Congo, and east to the border with Ethiopia).

Subspecies axillaris is not recognised by most authorities[2]. 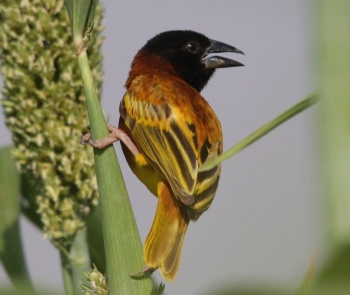 Nothing has been published on the behaviour of this species.

Search for photos of Cinnamon Weaver in the gallery