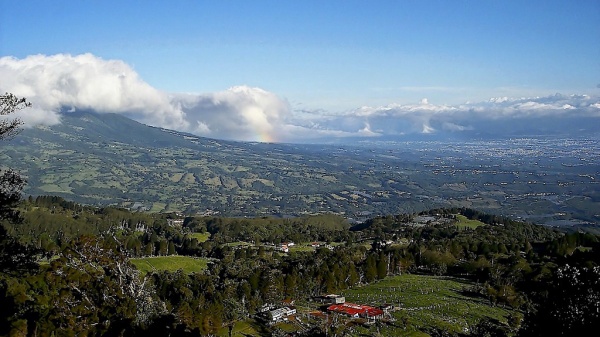 Photo © by Stanley Jones
Looking southeast from the road leading from Volcán Poás Parque Nacional. In the foreground is the small town of Poasita, and further out are the towns of Barva, San Rafael, Heredia, Santo Domingo and out view is San José. March 2007

A relatively small country in the Central America (just north of Panama) with almost 900 species of birds on the checklist. About 600 species are resident. This is a country with a relatively well developed tourist industry including some well developed bird lodges, but most of the bird life can be seen by utilizing budget options (see link near the bottom of this page).

51 species of the hummingbirds, 16 species of parrots (includes parakeets and macaws), 17 species of owl, toucans.

See the links to checklists on the web, in External Links below.

See the automatically generated article links below. Additionally, see the several relevant threads in the Birdforum Costa Rica section including one on less frequently visited sites

Costa Rica is served by two international airports with connections from North America, San Jose (the capital in the central valley) and Liberia which is located more northerly in the country. Being a relatively small country, driving around one should be able to reach most of the country from either airport.

Search for photos of Costa Rica in the gallery

The following 10 pages are in this category, out of 10 total.