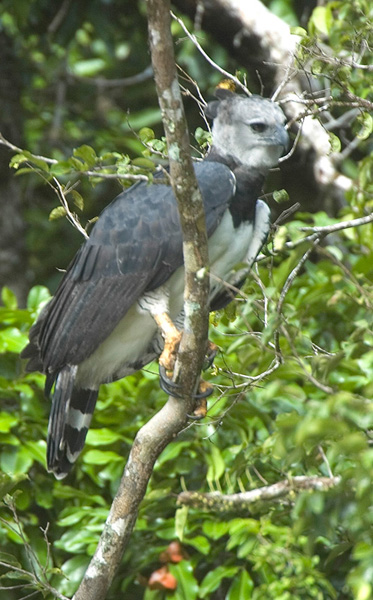 Length 89–105 cm (35-41¾ in); wingspan 180-200 cm; weight (male) 4.0-4.8 kg, (female) 7.6-9.0 kg
The Harpy Eagle is one of the heaviest and most powerful of eagles, though as a forest-dwelling bird, relatively short-winged compared to other large eagles to increase its manoeuvrability through tree canopies. What does mark it out from all other eagles, however is the immense size of its feet and talons, and the thickness of its legs.

Crested Eagle, which occurs in the same areas, is similar though substantially smaller, and relatively longer-tailed.

Central and South America: very rare in Mexico reported from Veracruz, Chiapas and Campeche, also from Belize and Guatemala south to Panama and in South America from Colombia, Venezuela and the Guianas south to southeast Brazil and northeast Argentina. 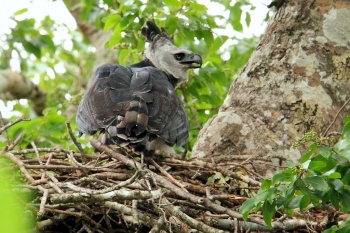 Primary lowland rainforest, mainly below 800 m, rarely as high as 1,600 m altitude. Occasionally soars over forest and sometimes perches on the highest treetops but spends much time in dense canopy foliage.

Their diet includes big animals such as sloths and howler and capuchin monkeys; males take prey in the 0.5-2.3 kg range, while females take prey 2.7-9 kg weight. 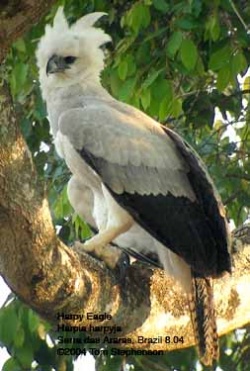 The nests are situated high up in the crowns of silk-cotton trees about 50-75 m tall. Made of sticks up to 4 cm thick,the nest is 1.5 m across and lined with green leaves and animal hair. Two eggs may be laid, but it is normal for only one young eaglet to be reared.

Search for photos of Harpy Eagle in the gallery

Search for videos of Harpy Eagle on BirdForum TV