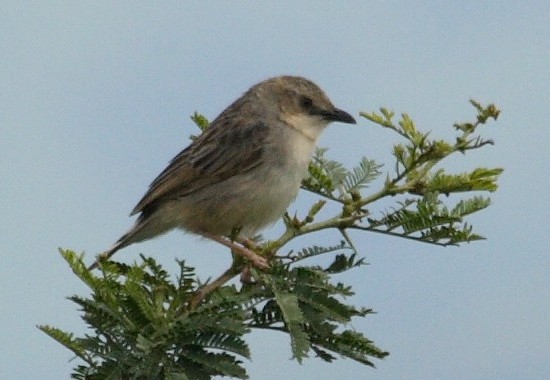 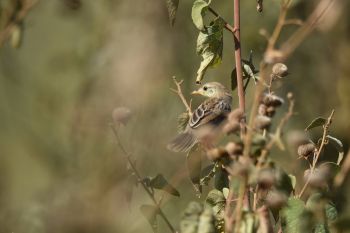 Length 15 cm. Heavy for a Cisticola; males 25 g, females 18 g
The crown and back are buffy brown with dark streaks and the flight feathers are brown, fringed rufous. The underparts are pale buff, and the legs and feet are pinkish brown. The dark bill is heavy and the eyes are brown.

There are seven[1] to nine [2]subspecies, based on variation in the colouration and streaking of the upperparts, but most are poorly differentiated.

Usually solitary. Inconspicuous and shy, except when calling (often from a prominent perch) in the breeding season.

Forages low in vegetation or on the ground, mainly for invertebrates, but also for seeds.

The call is distinctive; a loud croak "q-RRRRP" which is about 1 second long, repeated every 2 seconds.

Search for photos of Croaking Cisticola in the gallery