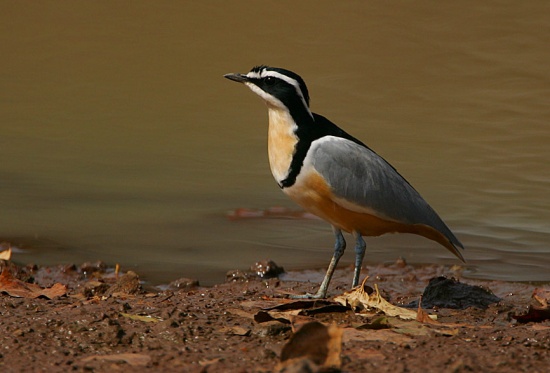 Sexes are similar, but juveniles are duller and the black marking are intermixed with brown

In flight, the bird looks white, with the exception of the orange belly and a black wing bar.

Widespread but very patchy distribution in sub-Saharan Africa but current status in the Western Palearctic is unclear.

Formerly bred on the Nile in southern Egypt but now apparently a very rare vagrant. Also recorded as a vagrant to Libya (August 1969), and old and more doubtful records for Jordan and the Canary Islands. Further south in Africa moves erratically in response to changing water levels and presumably did so in Egypt.

These irregular movements may well lead to further Western Palearctic records but one in Poland in October-November 1991, another in Gironde, France from July 1999 to February 2000 and a third in Belgium in June 2000 were regarded as escapes.

This species is now placed in its own monotypic family Pluvianidae. It was formerly included in the pratincole and courser family, Glareolidae.

They pick at small invertebrates, dragonflies and butterflies along the water's edge and nearby open ground (including roads).

These birds breed on freshwater sandbanks where the eggs are buried in the sand. They are cooled by water carried in the adults' breast feathers. They lay two to three eggs.

When landing after a flight the pair greet each other by raising their wings to show off their black and white markings.

The alternative name of "Crocodile Bird" comes from the belief that they pick tit bits out of the teeth of basking crocodiles, but this behaviour has not recently been documented.

Search for photos of Egyptian Plover in the gallery