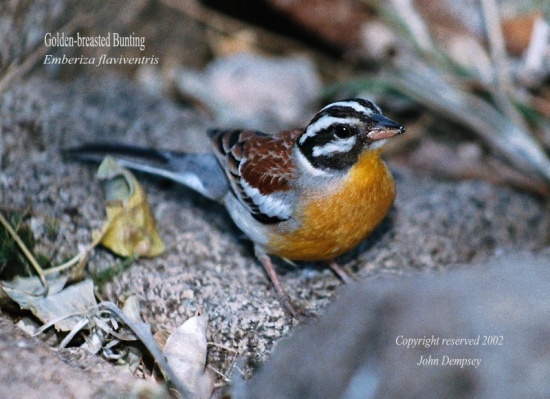 Sexes are very similar, but females - buff tone to head, browner head stripes, and the back may have dark streaks.
Young birds are duller and paler than the females.

There are four subspecies[1]:

Primarily a highland species found either in pairs or singly. They are mainly seen foraging on the ground (although males can sometimes be seen singing from the tops of trees).

They build a cup nest lined with fine grass or hair low in a shrub. The 2-3 glossy, black-lined, white or cream eggs are incubated for 12-13 days; the young fledge in another 16-17 days.

A ground feeder, the diet includes seeds, insects and spiders and sometimes larger creatures when the birds have young to feed.

Search for photos of Golden-breasted Bunting in the gallery

Search for videos of Golden-breasted Bunting on BirdForum TV