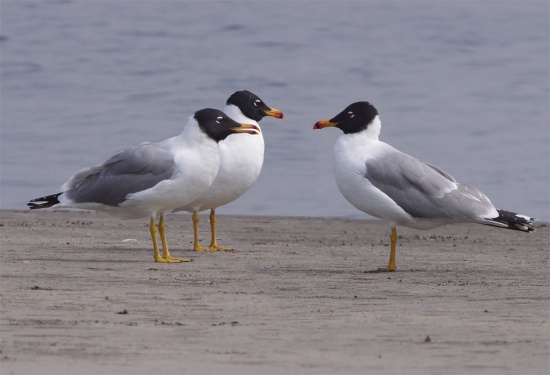 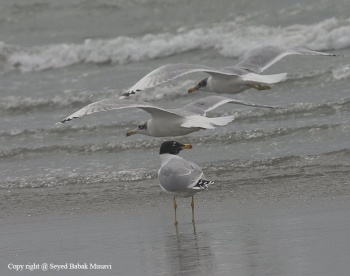 Length 59–72 cm (23¼-28½ in), wingspan 155-160 cm, weight 1-2 kg.
Structurally, it can be recognised by its angular head narrowing to its massive bill and peaked toward the rear of the head. Summer adults have a black hood, solid apart from the white eyelids, white body and tail, and silvery grey mantle and inner wings; the outer six primaries are extensively white with a black subterminal band.
The bill is yellow-based, red in the middle, with a black ring near the tip, with the extreme tip pale yellow.
The legs are yellow.
In winter, adults lose most of the hood, retaining a blackish bar from the eye and thinly over the rear of the crown.
Juveniles are similar to a huge Mediterranean Gull; first winters already with a substantially grey mantle, tail white with a solid black terminal band.
Second winters have black primaries with very limited white, and black tail band edged white.
Third winters similar to adult, except for traces of a black tail band and more extensive black on the primaries. 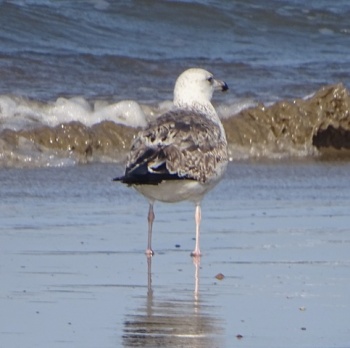 A huge gull, second or third largest in the family after Great Black-backed Gull (slightly larger) and Glaucous Gull (about the same size), and by far the largest gull with a black summer hood.
Faster-maturing than other large gulls, reaching maturity in 3 years like its much smaller congeners Mediterranean Gull and Relict Gull.

Breeds beside saline and freshwater lakes in south-central Asia west to easternmost Europe; winters from the eastern Mediterranean across southern Asian coasts to Burma. The breeding range has expanded westward in recent years, with a sizable colony now established in the Danube Delta in Ukraine[1].

This is a monotypic species[1] which, like its congeners, was formerly placed in the genus Larus[2][3].

Feeds mainly on fish, including fish carrion. Often piratical, using its size and strength to steal food from other seabirds, and occasionally kills other seabirds and small mammals. They also eat insects, birds eggs and reptiles.