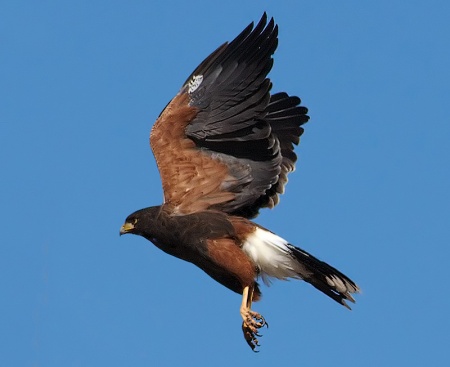 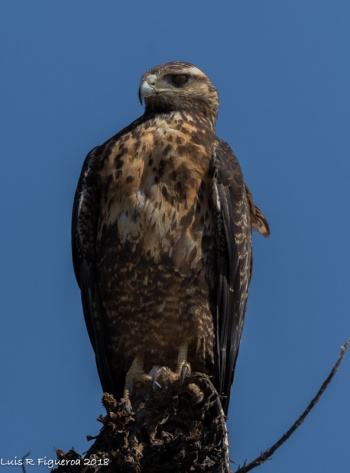 Length 45–59 cm (17¾-23¼ in), WS 107cm (42"), Wt. 900gm (2lb).
Blackish brown plumage with chestnut forewings (above and below) and thighs. The end of the tail and the rump are white, with distinctive black band between.
Females are typically 10% larger than males. Juveniles are similar in appearance, but have streaking common in this family.

The southernmost form (Bay-winged Hawk) remains streaked on underside and paler, streaked head even as adult, and is fairly pale on underside as juvenile.

Sonoran desert of the southwest USA and Mexico, Baja Penisula, Gulf Coast from central coastline of Texas southward through Mexico to Chile and Argentina. This species is absent from much of eastern South America 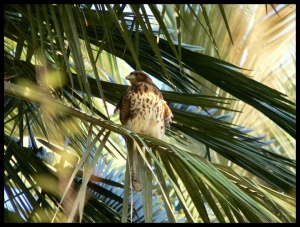 An additional subspecies P. u. superior in Baja California, Arizona, Sonora, and Sinaloa is not generally recognised[2].

Sparse woodland and semi-desert, as well as marshes.

An unusual behavior in its family is team hunting; birds will cooperate in taking prey, often taking perches in what seems like a strategic manner to confuse and herd its prey before one of the group strikes. This allows it to take larger prey such as jackrabbits. Teams can comprise 2 to 6 individuals. Other prey includes rodents, lizards, and birds.

They nest in a tree; the clutch consisting of 2–4 eggs which are incubated for 28 days.

Search for photos of Harris's Hawk in the gallery