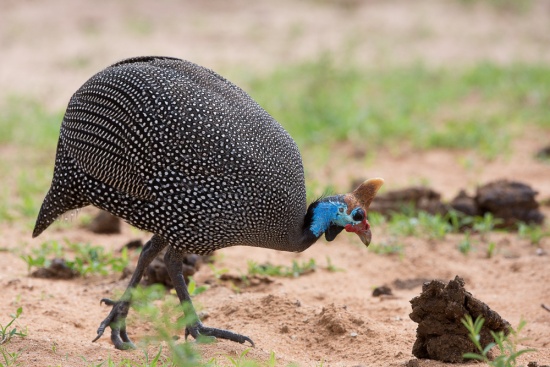 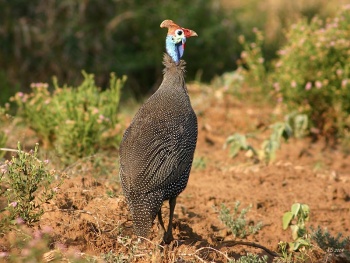 Widespread Africa south of the Sahara and extreme southern Arabia.

Widely introduced into the West Indies and southern France. 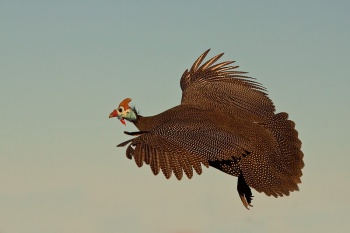 This is a common and familiar bird of bushveld, farmlands and open grassland areas across the country. Also in other dry, open habitats with scattered shrubs and trees such as savanna.

They are usually seen in flocks, which sometimes number in the hundreds.

This species spends most of the time on the ground, and birds are active and busy within the flock, males chasing each other around, scratching with their feet and pecking at morsels. Usually run away when approached, but will also fly, with rapid wingbeats. At night they roost in a tree or other tall structure.They have well-developed spurs and use these to great effect when fighting.

Scratching and digging for underground food items and pecking items from soil surface. They eat seeds, bulbs, tubers, berries, insects, snails and millipedes. Will scavenge in farmlands and around farmsteads for scraps and fallen grain. Guineafowl are particularly well suited to consuming massive quantities of lyme disease carrying ticks.

They nest throughout the summer months. The nest is a large scrape on the ground, which is lined with dry grass; It is hidden amidst dense grass cover or under bushes. Up to 30 eggs are laid, and more than one female may lay in the same nest, which then incubate the eggs for 26-28 days.

They make a number of different sounds, the raucous, chattering alarm call: kek-kek-kek-krrrrrr. It also has a musical two-syllabled whistle, often heard at evening time: pittoo, pittoo, pittoo - the second note is higher and louder than the first and this call may continue repeatedly for some time.

Search for photos of Helmeted Guineafowl in the gallery

Search for videos of Helmeted Guineafowl on BirdForum TV