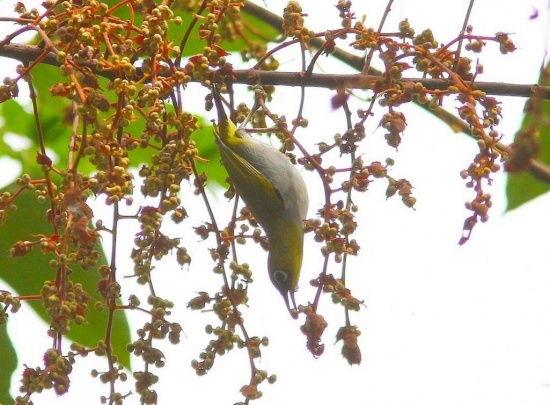 9.5-12 cm
Upperside olive-green, underside mostly medium grey but with bright yellow on throat, vent and in a central stripe going forward from the vent. Side of head shows black from eye to bill as well as a white eye-ring that is broken in front and above the eye is 1/3 as wide as the diameter of the eye.

Swinhoe's White-eye has a wider eye-ring (1/2 of diameter above the eye), brighter supraloral area (yellowish rather than green) and a longer, more pointed bill. Swinhoe's also has brighter wing coverts.

This species was defined only recently[2]. The subspecies included came from the former Oriental White-eye and Everett's White-eye.

Mostly foothill areas down almost to sea level. Likes broad-leaved forest both primary and secondary, but also found in edges, plantations, and shrub nearby.

Main food seems to be native fruits, supplemented by nectar and small invertebrates.

Search for photos of Hume's White-eye in the gallery