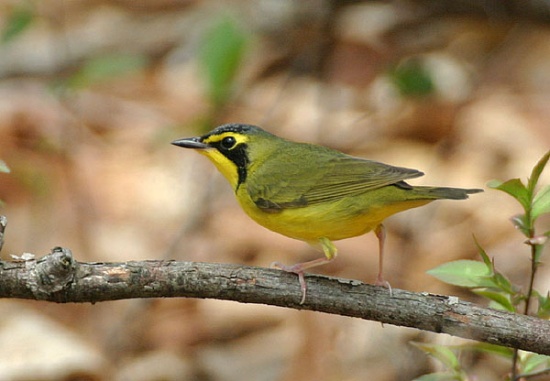 Photo by Glen Tepke
Photo is a male, taken Marblehead, Massachusetts, USA, 1 May 2004.

13 cm (5 to 6 inches) in length. Olive-green back and nape, yellow below from their throat to their belly. Tinge of black on crown, large black mask with a yellow pattern that runs from the beak and encircles the eyes. Females have slightly less black on the sides of their head, and immature birds may have almost no black at all.

This is a monotypic species[1]. More northern populations sometimes considered as a separate subspecies G. f. umbraticus but most authors reject this2.
Has hybridized with the Blue-winged Warbler twice.
Formerly placed in genus Oporornis,

They nest on the ground. 3 to 6 , white or cream and specked with brown eggs are laid. Incubation is done by the female only, and lasts for about 12 days. The young Kentucky Warblers usually leave the nest about 10 days after hatching.

Search for photos of Kentucky Warbler in the gallery