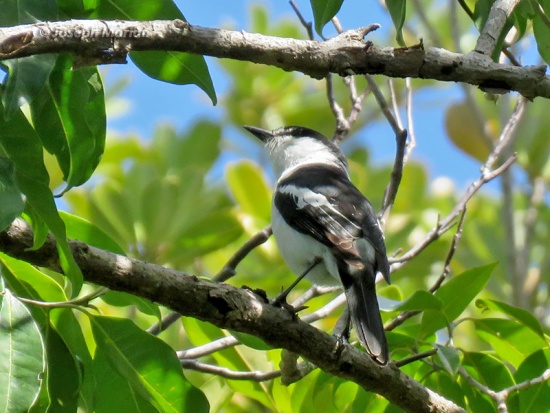 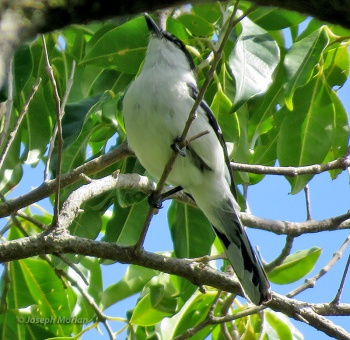 Differs from Polynesian Triller on Vanuatu between Santo and Efate by small or no supercilium, longer tail and more elongate shape, unmarked underparts, plain black crown and all-black bill. From Buff-bellied Monarch on Vanuatu by habits and plain white underparts. From White-collared Monarch on Makira by habits, white throat and face and black nape.

Endemic to Makira, Vanuatu and New Caledonia. Extinct on Norfolk Island. There have been no records of the local subspecies since 1942. The subspecies almost certainly became extinct as result of predation by the Black Rat and destruction of native forest.

Singles or groups of up to five forage in canopy or lower down in open habitats.

They eat insects (both adults and larvae, including caterpillars) as well as small fruits.

Variable calls include a repeated whistle. Also a double noted tche-tchu with first note ascending and second descending in pitch. Sometimes gives a more slurred br-r-reet or tyoor-r-rt. Song is a series of about 6–10 ringing kwee notes.

Search for photos of Long-tailed Triller in the BirdForum Gallery