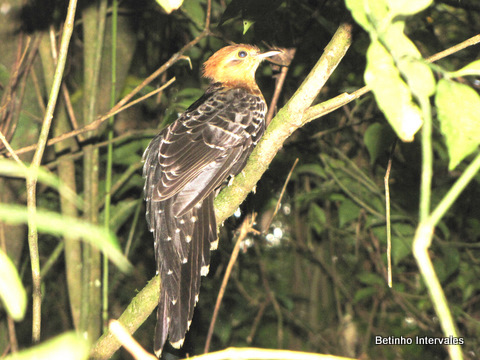 28cm. A small-headed and thin-necked Cuckoo.

Sexes similar. Juveniles are greyer, they have a grey-brown head, a white eye-stripe and a blackish back with some buff-edged feathers. Their throat and breast are greyish.

Found in tropical South America from Venezuela and Guyana through eastern Ecuador, eastern Peru and Bolivia to Brazil, Paraguay and northern Argentina.
Has a patchy and discontinuous distribution, uncommon to rare in its range but probably overlooked due its secretive habits.

Occurs in lowland tropical evergreen forest, in montane forest, scrub thickets, tangled forest with dense secondary woodland, transitional forest and seasonally inundated forest.
From the lowlands up to 1600m, occasionally up to 1900m in Venezuela.

A shy and secretive species.

Feeds on insects. Forages on the ground and in forest understorey.

A brood-parasitic. Parasites tyrant flycatchers and antthrushes. The young of the host disappear after the cuckoo hatches.

Search for photos of Pavonine Cuckoo in the gallery

Search for videos of Pavonine Cuckoo on BirdForum TV