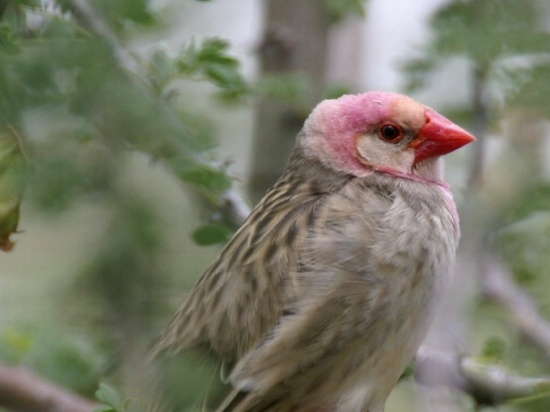 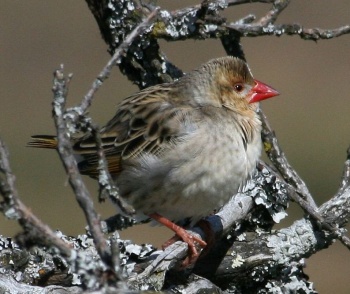 Subspecies spoliator is not recognised by all authorities[2]

The Quelea is one of the greatest avian agricultural pests in the Afrotropical region. It is a highly gregarious species with a nomadic lifestyle. It travels in huge flocks which can contain hundreds of thousands (indeed sometimes millions) of individuals. They can devastate a cereal crop in a matter of minutes. Being in an area where they are massing in numbers is a remarkable experience. At first light the flocks leave their roost to go for water and from a distance it looks as though a grass fire has started. The Queleas form into dense, highly synchronised flocks which look like clouds of smoke, and then, as the flock approaches you, the numbers are so vast their wing-beats sound like a high wind. A single flock of birds can take 10 or 15 minutes to pass overhead.

Colonial breeders. The male begins to weave the nest from grass and straw. After mating, both male and female complete the nest. The female lays 2-4 light blue eggs, which are incubated for twelve days. After the chicks hatch, they are fed caterpillars and protein-rich insects. After this time parents change to mainly feeding seeds. The young birds fledge and leave after two weeks in the nest.

Their diet is mainly grass seeds and grain. They also eat some insects.

Some populations are resident, while others are nomadic, travelling in huge flocks.

Search for photos of Red-billed Quelea in the gallery

Search for videos of Red-billed Quelea on BirdForum TV