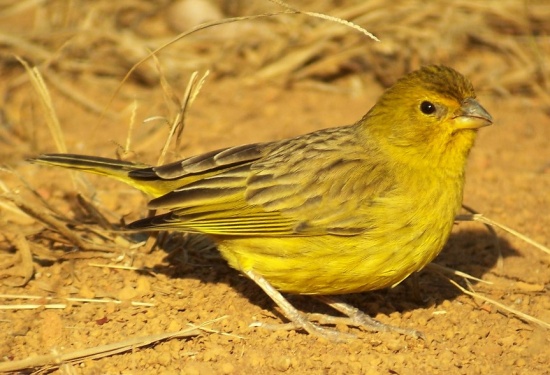 Male: Olive-brown above, lemon-yellow forecrown, yellow below, two white spots on the underside of the tail; these spots are visible in flight. The female is much duller and streakier.

In most of these areas with a patchy distribution. Often will leave breeding area outside of season, and in those times may wander around in larger flocks including other grassland finches (but usually not with other members of the same genus

Open, dry savanna, grassland, farmland and other disturbed areas. Does not seem to occur in lowland.

As researched near Brasilia, Brazil, breeding season is mainly December to May with a peak from late January to March. Nests are cup-shaped structures usually made from grass leaves and placed low over the ground, usually in ferns or tussock grass. Three eggs are common, lower numbers seen less frequently. Incubation and period before fledging are both 13 days.