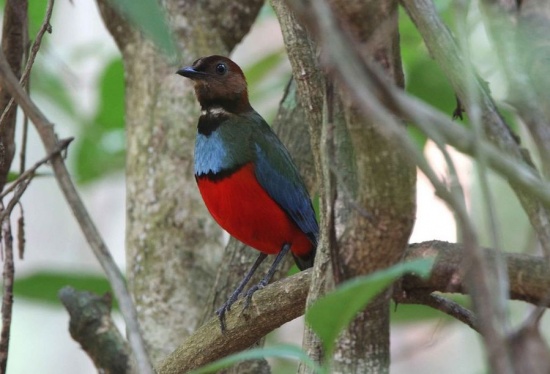 Females are duller and more green and less blue on breast. Juveniles are dull brown above and have a dull blue rump and tail. They are paler below, have a whitish throat and a dark brown breast with white spots.

Found on Sulawesi and the adjacent islands of Manterawu and Togian Islands, Indonesia.
Locally common.

This is a monotypic species.
Formerly included in Red-bellied Pitta.

Feeds on insects and their larvae, earthworms and some plant material.
Forages mainly on the ground.

Singing males recorded on territory from January to March but season probably to October.
The domed nest is made of twigs and leaves, grass and ferns. It's mostly placed on the ground or low in scrub or a tree. Some nests were placed 10m above the ground. Lays 2 eggs.

Search for photos of Sulawesi Pitta in the gallery