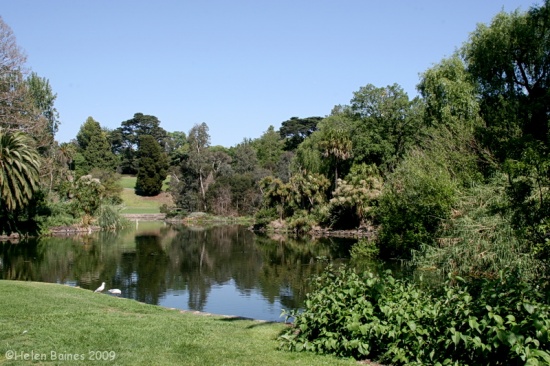 Photo by HelenB
The Botanic Gardens in Melbourne, established in 1845, Victoria, Australia, November 2009 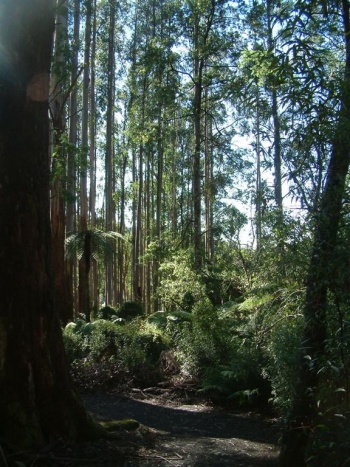 The southernmost of the mainland Australian states, which mostly contains less dry areas. The exception in the north-west corner with Little Desert and Hattah-Kulkyne parks have some spectacular wildlife and birdlive, including for example Mallee specialists. Victoria is bordered in the north by New South Wales, in the west by South Australia, and in the south by Bass Strait and Tasmania.

The capital city, Melbourne, is a sprawling bayside city of over 3 million, with many parklands and remnant pockets of vegetation. It is bordered by grasslands to the west, and the foothills of the Great Dividing Range to the north and east. The Great Dividing Range contains Victoria's largest swathes of eucalyptus forest, although pockets of similar forest can be found in the Otway Ranges, to the south-west of Melbourne, and in the Strzelecki Ranges to the south-east.

The main geographical regions of Victoria are: the semi-arid to arid Mallee and Wimmera of the states west and north-west; the wet temperate areas of south-west Otway Ranges and Gippsland to the east; and the north-eastern alpine area.

Victoria is Australia's smallest mainland state, approximately the same size in area as Great Britain. Public transport outside of the capital city is generally reliable via train or bus to most of the major regional centres, but varies considerably outside of these places. It is highly advisable to hire a car if more than a small region needs to be visited.

Distances from Melbourne to the major centres range from 550km (340mi) to Mildura in the north-west; 307km (220mi) to Wodonga on the NSW border to the north-east, 520km (324mi) to Mallacoota in the east; to closer centres such as Ballarat (105km to the west), Shepparton (184km to the north) and Morwell (150km to the east). Between cities and towns, roads are all paved and in a good navigable state of repair. Most larger towns have motels and caravan parks where accommodation may be found.

The climate ranges from cold and (sometimes) wet in the winter (average max. temperature of around 15 deg. celsius) to hot and dry during summer, where heatwaves cause temperatures in excess of 40 deg. celcius

Around 470 species have been recorded in Victoria.

National parks are a great place to see kangaroos, glow worms, platypus, wombats and Tasmanian devils in their natural habitat.

Victoria is Australia's second-smallest state, covering 227,600 square kilometres – about the size of the British Isles.

Victoria has more than 100 parks and reserves which cover about 17% of the state or more than 4.1 million hectares.

Please see individual websites for each park or reserve's details.

There are 11 Visitor Information Centres throughout Victoria. Here is a link to the one in Melbourne

Search for photos of Victoria in the gallery

Search for videos of Victoria on BirdForum TV