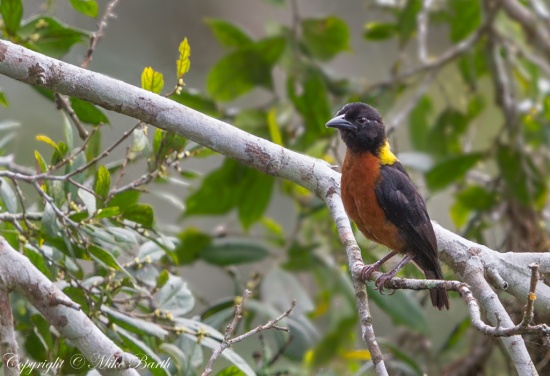 Females are duller with dull chestnut-brown breast and belly.
Juveniles have a dull forehead, chestnut-brown crown, nape and mantle, glossy black back, rump and wings and are sooty grey below wahsed with buff on chin, throat and breast.

Western and central Africa from Sierra Leone east to South Sudan.
Widespread. Uncommon in western part of its range, locally common in central forested regions. interscapularis formerly occured in Kakamega in southwestern Kenya but no records since more than 30 years.

Found in lowland forests along rivers or near swamps. Also in old plantations and secondary forest.
Tends to avoid human habitation. Up to 1300m in DRC, lower elsewhere.

Breeding season differs through range. A monogamous species, breeding in colonies with up to 50 nests, sometimes more. The nest is retort-shaped with a short, wide entrance tunnel, made of rootlets, vine tendrils and fibres. It's suspended 20 to 50m above the ground at the end of a thin branch. Lays 2 eggs.

Parasitized by Diederik Cuckoo and African Harrier Hawk is a major nest predator.

Presumably a resident with some local movements.

Search for photos of Yellow-mantled Weaver in the gallery