It has really been an explosive year for amphibian migration. Some of the things I've seen this year I still can't believe took place before my eyes.

It all started with a local visit to my trusted pond in the start of February. Despite it being so early in the year for this to happen, I still encountered three european common frogs, as well as two smooth newts. Next came the incredibly low temperatures for the region, which saw everything head back into the ponds. For a long time even after everything warmed up, only the newts were visible. I checked out a new site which was being managed for amphibians, and was disappointed there were no frogs here, even though I did count 55 smooth newts in this one small pond. Lovely to see such a healthy population here.

My wish from last year was granted when on the 22nd I saw a few toads at a very good site I knew about near me. I also got lovely views of them, including one toad kicking another in the face during a breeding squabble. This would be a major theme in sightings which were yet to come. I found four toads here at this time, as well as a lonely male common frog looking at the toads with what appeared to be interest.

The next day in another location, I successfully counted 17 frogs, including two pairs, with a further 5 toads and 1 frog at the previous toad site, which has very quickly become the most reliable site to see toads in the entire region, as far as I'm aware.

The day after that, in the frog location this time I counted 29 frogs, 2 pairs, and a single lone toad. This surprised me since toads were never recorded here before. Hopefully it would go on to find a mate in this large pond and breed- a sign they would be expanding their range from the reasonably close toad site, where this evening I found ten toads and again 1 frog.

The next day at the toad site I counted 39 toads, and at the nearby frog pond I counted an enormous 72 frogs, and the day after this located my first frogspawn of the year being produced by a large group of frogs in a site which was made very recently, surprising me greatly. At this particular site I also found 31 toads, including some sitting right where the construction workers were doing there thing. The obvious iron in the water didn't seem to bother them.

I made a few further visits during the daytime to find the area swamped by male frogs calling loudly, trying to entice and attract a mate. I then took a break from looking for them, but on the 12th March in one area of the pond the water seemed to be replaced with frogs! It amazed me how they tolerated being crammed like that into the pond- and a lot of them were kicking each other, a few even pushing with their arms against others, and two groups of frogs had formed a ball around females which was wriggling all over the place. I think the count was over 200, though obviously I could not count accurately!

In short, an extremely successful spring amphibian migration. I have been waiting for this since last summer, and it didn't just not disappoint, it completely satiated me, and to such an extent I lost all interest in looking for them anymore, there were so much of them!

Here's hoping Orchid May and Fledgeling June will not disappoint!

Member · From The Fens

I've always been a big fan of amphibians, in fact watching them in my garden pond was one of the big things that started my interest in nature in the first place. So far where I am there hasn't been a lot of activity so far, the main frog breeding pond still has no spawn, though there has been some in a few other ponds, and the newts in my garden pond have started laying eggs already. No sign of any toads yet, but they can often turn up a little later in the year.

I dug a very small garden pond in the autumn of 2019. (1m x 0.75m) By the early summer of 2020 I had my first frog. By the autumn of 2020, I had two. I bought a terracotta frog house and left the grasses long around the pond for the winter, as well as making sure there were air holes when the surface froze over. I hope I get some this year.

Update, the pond I said had no spawn now looks like this... 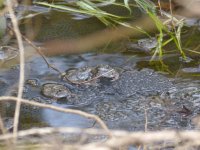 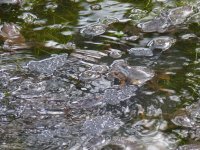 Deb Burhinus said:
I dug a very small garden pond in the autumn of 2019. (1m x 0.75m) By the early summer of 2020 I had my first frog. By the autumn of 2020, I had two. I bought a terracotta frog house and left the grasses long around the pond for the winter, as well as making sure there were air holes when the surface froze over. I hope I get some this year.
Click to expand...

Wow, that's fast. Heard of situations when it took years before that happened

G
Getting Your Eye In- Rediscovering Rusty Skills

May 13, 2021
Green Sandpiper
G
G
The First Minister and the Green Sand Porsche