I seem to have a vision of those beauties having something to do with a loo, if I'm not mistaken ('twas a long time ago now)

Saturday was forecast to be a lovely day, so we headed out already on Friday and camped outside a few kms from the Sobibór GGO site. The road that goes right to the owls is now closed for public - it has probably nothing to do with the owls, it's just that forest roads like this have been living in a sort of a gray area and gray areas gave a tendency to get clarified over time. A bit annoying for the birders (it's now a 2 kms walk one way), probably better for the owls We tried for them in the night with IR, did not find them - but we also weren't at the best spots, because those are even further away.

The whole Saturday was dedicated to Azrue Tits in the Sobibór area, which has a lot of habitat that fits the new info jurek found. The walks were great, as this area always is, the chat with border guards was friendly, but the highlight was seeing a pair of Moose from close by, as birds were rather scarce a no ATs showed up.

For the evening, we moved to the area around the Polesie NP to look for mammals. First we again found a place with a lot of Harvest Mice, the fifth such place in the last two months (after having looked for them fruitlessly for a long time). The IR vision really changes the game here. Not much else though and it started to look not too promising - and then we found a Hazel Dormouse (our first). Not only it is really late for it to be out, we also found it from a moving car which I would never really have guessed. Again, the IR is the deal.

Today we got up at 5:30 and by 6 we were already walking on the GGO trail DMW posted about to check whether there is anything to it. We walked one way in the dark, stayed through the dawn (while watching several Moose from the viewing tower which overlooks a really great landscape) and walked back in the light, but found nothing in any part of the EM spectrum available to us. It's either not easy, or they aren't there, who knows

Today it is cold and windy, so after an unsuccessful attempt to follow up on a reported 50-headed Shore Lark flock nearby, we drove back home.
H

Supporter
Well, it sounds like it could be a lot worse, even if the main target is absent so far.
Good Luck

look at it this way: ay least you are getting out!

Yeah, I am not claiming this is bad entertainment. When it comes to birding, it is rarely so, with the major exception of the Sieradz Bluetail. Yes, I got the messages also yesterday and today, no, I am not going to see that park ever again if I can avoid it ... at least with the Azure Tits, I get to freely decide where do I not see them

Well, I have to admit that my motivation for this project has gone done a little bit today, since we just twitched one in Warsaw First record for Poland since 2004! Bird was found on 27/12 on a feeder right outside of a someone's window, then not found again until 1/1. Since then it was seen every day (so three times), always for a brief moment around noon - and today we were there to witness it (I also went on Friday, but only after the report of the re-sighting of the bird, which was futile as the bird shows up only once a day). Quite a lot of people came today - I don't think the small back street in a peripheral village of the city ever saw 30 parked cars before - the finders are apparently birders and they even gave out some refreshments - we have personally decided to not enter the small garden because we did not feel comfortable in such a large and packed crowd even outdoors due to covid risk and so we watched from the street, looking across another property, but those people were cool with that as well.

Shame that it's during the pandemic because a twitchable Azure Tit 15 minutes by taxi from an international airport would surely be attractive even to people from other countries in more normal times. 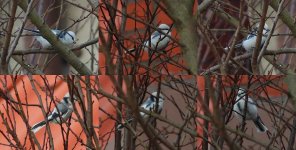 For some reason, all sorts of rarities are cropping up in Italy as well, but nobody but the locals can twitch them! Very envious Jan, what a fantastic bird! And what a twitch! We briefly considered going to se the White-headed Duck in the Po Delta, but there was just a one-day window when inter-regional travel was allowed and it was a 4-hour drive each way and terrible weather too, so we opted out. The Xmas lockdown should be over on the 6th, but then they are talking a about weekend lockdowns, so it looks as if we'll not be going anywhere for a long time...

Awesome! I'd certainly consider twitching this in a normal year

Apparently it was the biggest twitch in polish history with over 70 people on site at one moment. It's event in major newspapers. The bird is still present reportedly.
You must log in or register to reply here.

A weekend in northern Tuscany

Cuba but not as we planned it
2