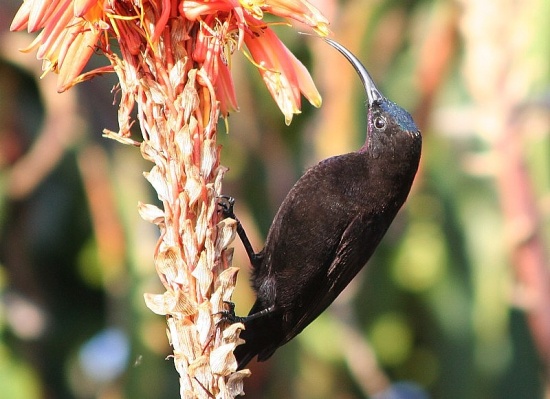 Adult male: The forecrown is metallic green and the throat, carpal patch and rump are iridescent purple. Otherwise the plumage is jet black (fresh plumage) to brownish black. Appears all-black unless seen at close range in good light. There is no eclipse plumage in this species.

Immature: Similar to the adult female, but with an orange to brown gape; the immature male has a purple throat. 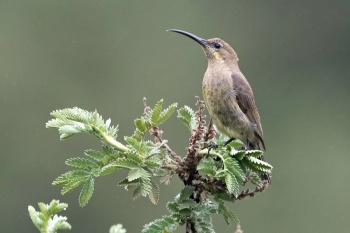 Sub-Saharan Africa: Congo, DRC, Tanzania, Kenya and Somalia in the north to South Africa in the south.

This is one of the seven sunbirds that have recently been moved into the genus Chalcomitra from the genus Nectarinia. 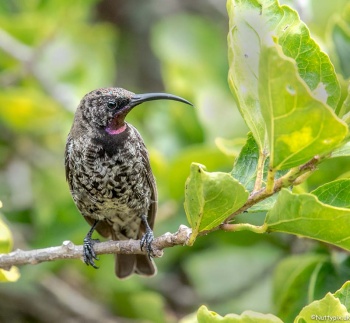 Seen singly, in pairs, or in loose groups.

Feeds on nectar, juices of fruits, insects and spiders. Use of even good nectar sites is erratic; will fly long distances to isolated food sources.

Monogamous and territorial. The nest is built by the female using spiders web to bind lichen, grass, down, bark and leaves into a pear-shaped structure suspended from a branch. One to three eggs are laid and incubated for 13-18 days by the female. Parasitised by Klaas's Cuckoo, African Emerald Cuckoo and Green-backed Honeyguide.

Search for photos of Amethyst Sunbird in the gallery