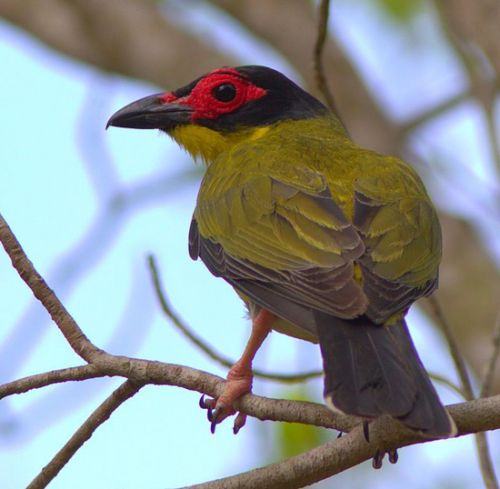 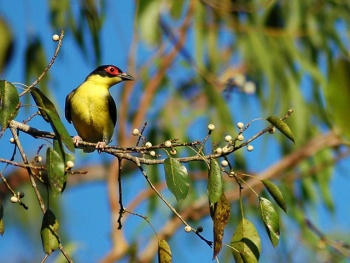 Males are easily recognized, but the streaky females and immatures can be confused with the Olive-backed Oriole, Brown Oriole, Fawn-breasted Bowerbird and juvenile Metallic Starling.

There are conflicting taxonomic treatments for the figbirds. Previously, Sphecotheres vieilloti and S. viridis were treated as a single widespread species, the Figbird (Sphecotheres viridis). Some Australian field guides continue to consider the two a single species, but following Schodde & Mason (1999), which largely follow White & Bruce (1986) and Andrew (1992), most current Australian authorities accept the split. 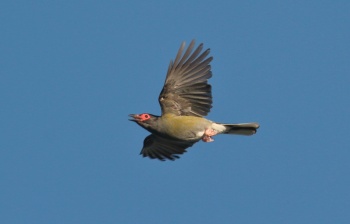 Among the sources that treat these as separate species, there is not an agreement on which subspecies belong to which species; specifically in regards of flaviventris. The problem relates to the background used for the split. The first possibility, as recommended by most authorities, including the earlier mentioned sources and Howard & Moore, mainly rely on size, zoo-geography and hybridization. Following this taxonomy, S. vieilloti includes nominate (S. v. vieilloti; eastern Australia, southern New Guinea and Kai Islands), ashbyi (northern Australia) and flaviventris (northern Australia), while S. viridis, based on its small size, its green throat and chest, and its isolated distribution, is considered a monotypic species restricted to the eastern Lesser Sundas.

An additional problem relates to the subspecies recognized. In addition to the four previously named taxa (viridis, flaviventris, vieilloti and ashbyi), Howard and Moore recognized cucullatus from the Kai Islands and salvadorii from south-eastern New Guinea. Clements do not recognize these two as distinct subspecies, and instead include the population from south-eastern New Guinea in vieilloti and the populations the Kai Islands in flaviventris.

It builds a flimsy, and saucer-shaped nest from plant fibre and tendrils. Three eggs are laid and are incubated by both parents; additional birds may help feed the young.

Search for photos of Australasian Figbird in the gallery

Search for videos of Australasian Figbird on BirdForum TV