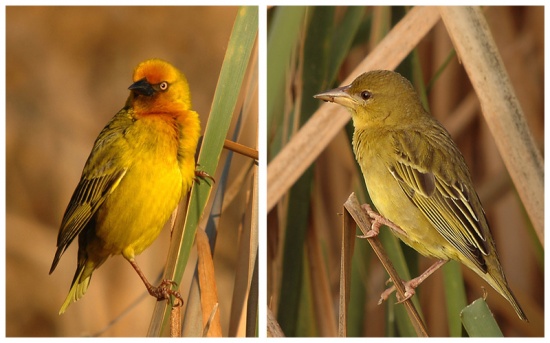 Length 17-18 cm (6¾-7 in), mass 36-55 g; males larger than females.
The Cape Weaver is a stocky bird with streaked olive-brown upper parts and a long pointed conical bill.
Adult breeding male: Face and chin chestnut- to orange-brown; gradual transition to yellow on the rest of the head. Wings olive-brown, feathers edged yellow. Underparts yellow; some birds have chestnut-brown or orange feathers on the breast and belly. The iris is white and the bill is black. 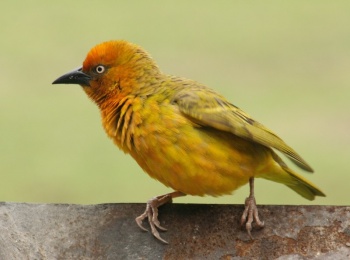 Adult non-breeding male: Duller than the breeding male, with a brown bill, and often without the dark face.
Adult female: Dull olive-brown above; wings brown with feathers edged yellow. The chin and throat are pale yellow-buff, shading to pale yellow on the lower belly. The bill is light brown, and the eyes are brown.
Immature: Similar to the female, but greener above.

This is a monotypic species[1]. Some authors recognise three subspecies[2], but these are poorly defined: There is considerable variation within flocks and regional variation is largely clinal. 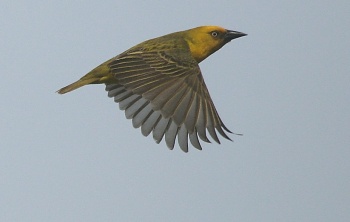 This common species occurs in grassland, agricultural and fynbos habitats, often near rivers. Frequently roosts and breeds in reedbeds.

Usually in flocks, often feeding with other seed-eating species.

Forages on the ground (often turning over small stones and dried animal-pats), in trees and shrubs (sometimes stripping bark) and aerially for seeds, invertebrates, fruit and nectar.

Polygynous, each male breeding with as many as seven females, usually in noisy colonies with up to 20 other males. These colonies are found in trees (often willows or Eucalyptus, rarely palms) and reedbeds. The males build large coarsely woven nests made of grass and leaf strips with a downward facing entrance. They are built between two reed-stalks or suspended from the tip of a branch. Two to five eggs are laid from June to January.

Parasitised by the Dideric Cuckoo.

The Hadada Ibis will sometimes nest in the weaver colonies.

Search for photos of Cape Weaver in the gallery